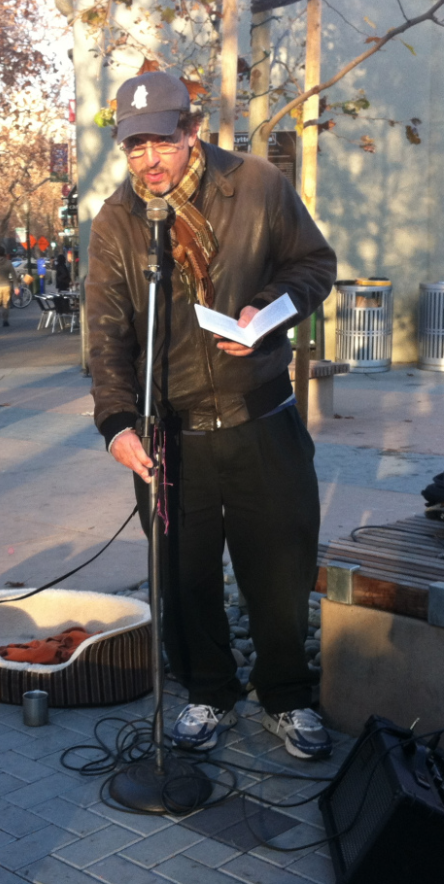 I WISH THAT I KNEW WHAT I KNOW NOW, WHEN I WAS YOUNGER: Mark Weiss, channeling Ginsburg Howl, at Lytton Plaza Palo Alto, 2011, photo by Tommy Jordan aka Tah

This started out as a private correspondence about sundry arts topics but I thought I’d reduce it to alphabetical list, short i.d., and a link, for general use:

Beth Custer, musician and composer in San Francisco; performed as “Beat Hotel Rm 32 Reads ‘Howl’, Palo Alto and San Francisco; hub of thousands of moments and motions; I’ve probably collaborated with Beth in about 10 ways, but nothing that is piece de resistance, just yet.

Kay Kostopolous, Stanford professor of drama; singer, actress; pka Kay Kosty, Black Olive; check: Kostopoulos: a rose by any other name!! Kay and I have an unfinished “collaboration” regarding Stella Brooks, who was not really a Beat but spanned Tennesse Williams, Woody Guthrie and Marlon Brando.

Matt Gonzalez, artist and arts macher, who dabbled in politics; Columbia and Stanford; writes; he’s way better of a writer than I is.

Nancy Peters, San Francisco Beat, scholar and writer, at City Lights, she is the co-owner;

(Paula Kirkeby), founder Smith-Andersen Gallery; knew Bruce Connor; Palo Alto; It’s a pretty esoteric and in this case solipsistic take on the Beats that Paula appears here; she was good friends and partner-in-near-crime with Bruce Conner, who sometimes is mentioned in same breath as Beats; she was close to Bruce Beasley, the sculptor who early in his creative life helped build dragsters — I want to someday ask him about “Beatnik Bandit” — see, self-reflexive and obscure. Beasley benched Kirkeby in Santa Clara. But I would not be who I am today without having met Paula.

Peter Kushner, Dartmouth classmate of Alden Van Buskirk; father of Rachel Kushner; San Francisco — Sunset District; He’s a scientist so could not be a Beat. Beat-ish.

Pinky (Kushner nee) — from Cuba before St. Louis; met Alden Van Buskirk in grad school; married his friend Peter Kushner; mother of novelist Rachel Kushner; has red hair; Ok, thinking further about this: the Peter and Pinky (and Rachel) in my mind, and in this blog, are like cross-sections of very complex organisms as in I have no idea who they are; I admire them. If you read this, you’ll see Pinky is pretty amazing but probably not a Beat, other than she knew Alden, who ex post facto and post-mordem is sort of a Beat.  Mrs. Kushner is like that Aztlan word for force of nature.

Rachel Kushner – novelist, b. circa 1970; not actually in this story except as ghost or muse or due to the influence of her titles: Mars Room, Flamethrowers, Codex from Cuba; ok, I admit I own all three of those books but have not read them yet. Rachel was speaking at Green Apple a few months ago, and Terry and I were in the City, but we opted for Dumpling Time rather than the reading — that’s how shallow we are. But typing the words “Rachel Kushner” into my blog makes me think I am getting better as a writer.

Terry Acebo Davis — artist, arts commissioner from Palo Alto by way of Oakland and Fremont; married to Mark Weiss; San Jose State, MFA. More to come. I bought Terry for Chanukah a red leather beret, which makes her look sort of French and maybe Beat-ish. She is currently reading about five women artists from the Ninth Street show, 1957.

and1: this is from the Chron’s 50th anniversary of the Beats, by David Wiegand, Jane Ganahl and all:

ANDREI CODRESCU, poet: Once this woman I met – we started talking about poetry – but she said she was really interested in sleeping with a woman. So we looked around the store and found a likely candidate leafing thru Wittgenstein’s “Notebooks,” or something, and I said, “How about her?” and she said, “She’s great.” So I asked her, “Would you like to sleep with a woman?” and she said, “Yes, I’ve always wanted to.” So we all went up to the Dante Hotel and got a room for $5 there, but then I left them. About a week later, we met at Vesuvio’s and they thanked me – they were living together! All of this took place in the bookstore.