OR, HOW BIG IZ THE BABY? 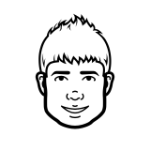 I argued in my application for the ARB that architects per se were over-represented on the board and engage in a lot of log-rolling. I guess they listened to me and appointed someone is who is studying to be an architect, Kyu -Young Kim, Paly class of 2003.

Young Master Kim also apparently, and this is news to me as of 2 minutes ago, applied for PATC in 2012, the seat Carl King took. Sayeth he:

If appointed, I would specifically like to see the commission change and evolve for the better of the city’s future in a way that is actively productive. While Palo Alto is a historic city and the past and present civil servants have done their best to bring us where we are, I believe the city needs to continue to adopt ways of setting itself up to prosper and succeed in being a place our residents are proud to call home, as the birthplace of the Silicon Valley.

Though some might wish for Palo Alto to stay only as populated as it is (or even was), it is inevitable that our City will continue to grow. We must make the best recommendations to the Council to not only prosper in growth, but so that even as we’re growing, we’re always staying one step ahead.

The file is here.

edit to add: For comparison sake, Robert Gooyer was a San Mateo planning commissioner and licensed since 1980 in California as an AIA architect (i.e. for 30 + years) at the time of his appoint to the same board; Kyu-Young also applied for that seat; this appointment is his third attempt. 3rd time da charm, bras!

Currently serving as a kindergarten teacher at New Community Baptist Church in addition to being a small group leader and facilities rental coordinator.
(I guess age is relative; actually this is making me flash to the Adam Johnson story about precocious Palo Altans).

coda: more from the file:

What is it about the Architectural Review Board that interests you? What qualities, experience and expertise would you bring to the Architectural Review Board?
I am a young and competent Architectural professional with a high level of enthusiasm for my city and Architecture.
I’ve traveled around the world and will lower the average age of the board members. I am also a long-time resident of Palo Alto and have grown up here. (He says above this that after graduating with a b.a. from SLO and being “en route” to becoming an actual architect he had visited Paris, Seoul and New York).

Yikes: As I continue to work thru the Kyu-Young Kim file and update this post, my anticipation that attempt #4 for board or commission would be a break thru falls flat, like a house of cards, in that for attempt 4, his third waving of the bat I have to say more like Tim Lincecum at plate than Tony Gwynn, he turns in barely 10 lines and 200 words, to my 2,000 or so. Check it.

I’m confused: was their a secret bathing suit segment of the competition only open to the Millenials in this packet — YaKaterina “Kate” Vershov-Downing, Adrian Fine, and Kyu-Young Kim – that I was not privy to? Also, I do feel it is odd that so many of the ballots came back identical, in groups of 3, 4 and 5. Looks like a possible Brown Act violation to me, I wrote to Clerks office and City Attorney today, especially in the wake of the Grand Jury saying we did this – serial meetings — before.

outro2 and really these guys and gals look more like someone at SXSW for the first time than helping We The People vet the billion dollar real estate industry here. Stinky puffs

todays post is brought to you by the color GREEN

And:
Here he says “I followed my wife to New York” and “My wife got a job in Paris so I followed her there” — sounds like we should have seated the wife!

It is a mere surmise, sir, that this guy is not remotely qualified for Leadership in Palo Alto

Do note that the person that Gennady Sheyner copiously 10 times refers to as “Kate Downing” or “Downing” is also and perhaps more commonly known as either Yekaterina S Vershov (at the State of California Bar for instance) or Yekaterina Vershov Downing in her application and by the Clerk of Palo Alto yesterday.

She was also, research shows, a summer associate for Fenwick and West a prestigious law firm, for two months in 2009, here before landing at VMWare I mean ServiceNow.

Not to be snide but I am saying that Vershov Downing the lawyer PATC and Kyu Young Kim the architect in training at ARB are not Mark Michael and Robert Gooyer; being unqualified is not diversity, please.

ok, ok, an encore (but this does need a wee bit of editing, especially if I sent it on to Council per se): Ms. Ballentyne or Ballentine the seated ARB person, I crossed off, in my head, for two reasons: 1) despite the diversity of her skill-sets and I think I can recall finding her somewhat pleasing to listen to, that she is a Realtor is for me a strike against; 2) further in her packet she offers 385 Sherman as an exemplary project. Huh? This is creating havoc in the neighborhood; myself, in sympathy and numerous others panned it; you have a fully leased building and you want to knock it down and replace it with a bigger building, just to make bank, damn the torpedoes and neighbors? And she calls that “harmony”? To wit:
As an advocate for contextual harmony, I cannot help but be attracted to the project at 385 Sherman Ave. near Sarah Wallis Park that came before the board in August.
It illustrates well how perceptions regarding development trends coupled with ARB design review effectiveness have polarized the community. One only has to look to a few of the online comments to get a sense of the passion ignited by the complicated issue of context. That the ARB voted 3/2 to approve it, is further evidence that even given a couple design cycles, ARB architects still wrestled with it’s scale/ramifications/contextual harmony.

May we live in interesting times.

and as i read this to a trusted friend and advisor the next a.m, i am adding a Oakley hall track as third musical needle drop: