Tolendo tolens and the future of Democracy

Bob Watson, Willie Crawford and Bobby Tolan were all teammates at Fremont High in Los Angeles. Tolan held his bat usually high in his stance. I was sometimes compared to him, for that reason.

A New York Times podcast mentions that in 2008 Tolan’s son was shot by the police in front of his parents’ Texas home, thus ending his baseball hopes. Ifill is discussing this in context of Rittenhouse the young thug who killed a man in Wisconsin recently without penalty. The headline contemplates a post-Democratic America though so far I am not following the argument or that conclusion. More compelling was an op-ed claiming our world is worse than that imagined in “The Matrix”.

In 2013 when I came back to lead LDF, we worked on a case, filed an amicus brief in the Supreme Court in a case that I thought at the time was going to be the case that was going to center and lift the issue of police violence against unarmed black people in a way that we had never seen. This is an issue I had been exposed to from the time I was a child with police killings here in New York City, and I thought this case was it. And the reason I thought this case was it is because it involved a young man named Robbie Tolan and Robbie Tolan was driving a very nice car in Texas and he lived with his parents. He drove into their driveway in a very nice neighborhood, then the police tailed him and followed him and came out and started to question him and his parents came out and said that’s our son, like what’s going on. And the police made some kind of move towards his mom and then, of course, he was blocking for his mom, and the police shot him.

And I thought, this is the case. Not only because of those facts, but Robbie Tolan happened to be a baseball player and his father had been a Major League Baseball player. I thought this is it.

This is the case. Now I’m betting most people listening have never heard of Robbie Tolan. I thought the case was the exemplar. It turned out the exemplar was Mike Brown, actually. So we don’t even know what is going to get the consciousness of the people. I don’t think there’s anything wrong with that. And when it happens, it’s worthwhile I think, for people to see something in a moment that helps dramatize for them the nature of an injustice that they may have known about but that they couldn’t see as clearly as crystal clear as they can through a particular incident or case. 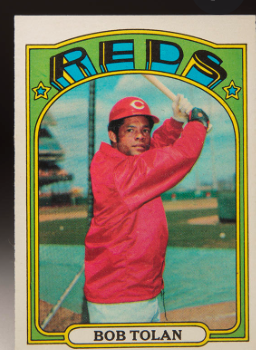 Bobby Tolan hit 86 homers in 1,282 games with five teams most prominently the Reds – the thing about the Atlanta high school hoops team comes from a review I saw about a book about W.E.B. Dubois and music, Prof Jeffers of University of Oklahoma but from Atl. Baker Butler high, maybe Butler Baker, but not the one Mack Jones attended.