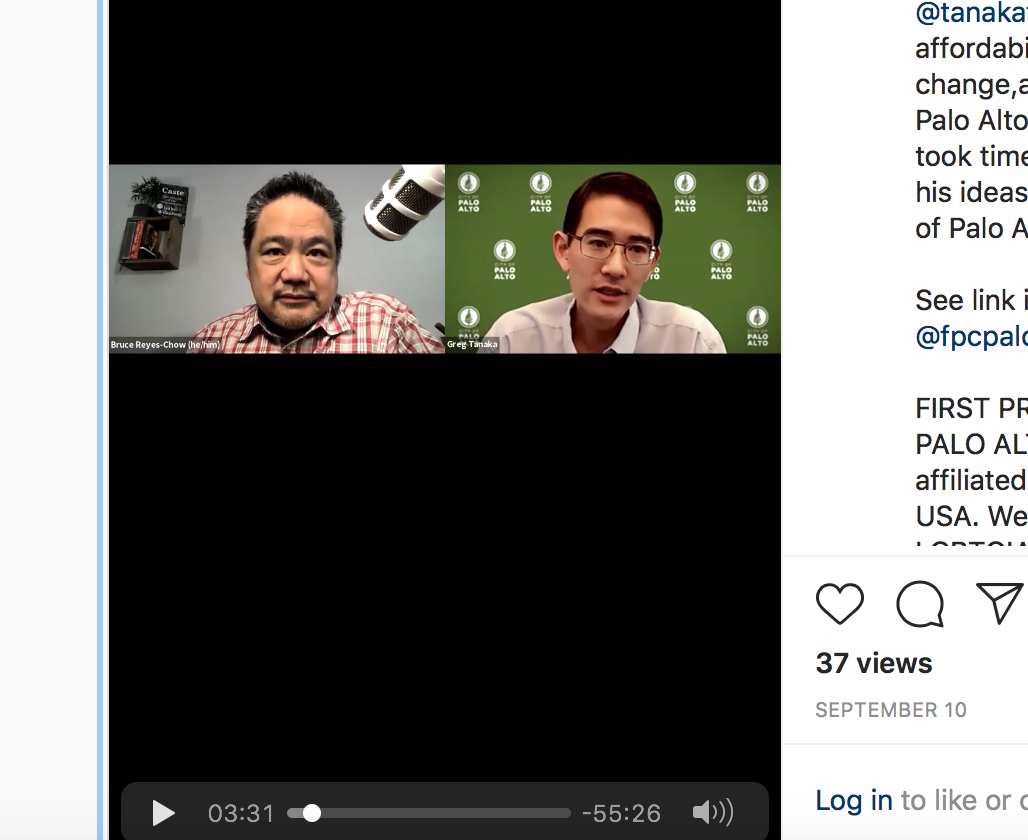 ain’t no good for you, palo alto voters, tanaka

I da know what the fuck but Greg Tanaka mentions Satan twice in the first 30 minutes of his interview with the rev Bruce Reyes Chow of 1st Prez.

This guy is a nightmare. He puts the bent in “incumbent”. How did he decide to run in the first place? Who…does…number…two…work…for?

These are my notes from a day or two ago watching this crap. I’ve got the Raiders on which is getting me so psyched:

Actually I want to mention that I am a Jew and there’s a riff, coming out of Beth Am, that Satan if you go old school and back to the source is God’s book-keeper and his job, during this Jew holy week, between Rosh HaShanah head of the year and Yom Kippur when we eat canned fish well-sealed, God is laying it out for the next 12 months of OT retribution baby and basically when we, like, blow the Ram’s horn, the shofar, we do it in a shout out to the old days when it would “confuse” Satan, and thereby spare us from The Grim Reaper, excuse my mixed metaphor. Did i mention that Ed Solomon the Bill and Ted dude, was in my Hebrew school car pool? I’m also liking some of Vince DiFiore’s trumpet solo especially on Motorcade of Generosity as pseudo-fake-Satan riffs.

But Tanaka, what’s his deal?

And I just want to shout out — hats off, Shirley, for RBG but also whoevrer wrote Sullivan Vs New York Times protecting freedom to toss serious shades on electeds and fuck-wad incumbents.

This is the unedited draft. I got a guy in LA who might be able to pull some reocords in Northridge to refute or prove Greg Tanaka’s statement that he lived three doors down from a victim of Satanic murderer Richard Ramirez the Night Stalker. Peterson. Look it up.

(Kind of reminds of the Chill Phil saga at Paly but I digress. Also, the title riffs on The Rolling Stones, not sure what songs…)

This is pretty rough, but I think you get my drift:

I’m at minute 33 of Greg Tanaka’s interview with Bruce Reyes Chow and I am baffled.

He starts out by talking about Richard Ramirez, the Night Stalker. I had to look it up: Ramirez is dead of cancer at age 53 but in his 20s carried out a series of 19 attacks and murders, including one in Northridge, CA which Greg Tanaka claims was three doors down from him, at the time, his neighbors. Wiki says there name was Peterson and they survived the attack; Tanaka falsely claims they were shot in the head. The woman was shot in the face and and man in the neck, but they escaped. Northridge is not generally thought of as a locus of Richard Ramirez nightmare. Nor do other Northridgeans lead with this fact.

Then apropos of Black Lives Matter and police reform, whereas Bruce says he was “on the wrong side of the baton a few times” while living in SF, Greg says that recently at Middlefield — on his motorized skateboard or bike, a group of young people in a white minivan verbally  accosted him about being Asian, blaming him for Covid — which supporters of Trump claim, they call it “Kong Flu” or “China virus”.

But even oddlier, Tanaka riffs on Stanford Prison Experiment and that maybe if police are also cross-trained in fire and carry spare uniforms in their car, this somehow prevents the brutal murder by a rogue police officer in Minneapolis of George Floyd. I want to know, using his odd Socratism: ok, what does Zimbardo say about BLM? Do intelligent people try to invoke the purported lessons of The Stanford Prison Experiment regarding today’s challenges at reform? (I also think of Ron Jones and the Cubberley experiment, aka The Wave, which to me is oddly similar).

They also namecheck CAHOOT which is a program, I learn wherein Springfield and Eugene OR have a special mental health intervention program that they spend $2.1m and claim savings of $20m in emergency response, that (Paly basketball star) Ron Wyden US senator has a bill to expand by at least 10 fold to $25m if that means national.

Cahoot in this case is an acronym. Crisis Assistance Helping Out On The Streets. My Webster’s 9th — I can crosscheck with my 11th — I spent $30 on a new dictionary, stimulus spending first time since 1984 towards I guess this flow, my blog — says its from the French word for “hut” as in strange bedfellows or under one roof and says that it entered the language in 1829 and is usually a plural, cahoots sic and is often used in the phrase like “Is Greg Tanaka the weird incumbent Palo Alto council candidate in cahoots with the devil?”

More to the point, in 30 minutes, I have not heard one good idea. I barely hear ideas at all. I hear words, phrases, half descriptions, no actually linking of thoughts or depth of thought.

He says he is the council’s leader on retail — didn’t Lydia Kou own a business? A video shop?

Tanaka a couple times points to the Cali Ave redo as an accomplishment – isn’t that just giving a bunch of contractors $10 m to repave and re-stripe?

Isn’t IBRC just a blue ribbon fluff job for the new Police Station? Or did I miss the big pothole problem that happened and then we fixed it? I liked Le Levy’s song about flivver quiver or whatever. But I’m an arts presenter.

We still don’t believe Tanaka went to Berkeley or CalTech — did he graduate? I guess it’s progress that he didn’t claim a fake Stanford education, like his LinkedIn misleadingly claimed.

I don’t believe Northridge is comparable in any way to East Palo Alto – is he comparing 1985 dollars to 2020 dollars?

I don’t believe Percolata does jack shit. He says he goes to New York to tout it. How many employees does it have? How much revenue? i believe it may have gotten some random gift from a VC but that doesn’t mean its a business. (It looks to me like it spies on consumers, and then pivots to spying on workers).

From his story you cannot tell which family member was interred and which died or left.

He mumbles and jumbles.

As far as I can tell the people who told him to run were Chop Keenan, an architect and others who are special interests.

So, yeah if you believe in Satan as a supernatural evil force that walks among us or flies and causes havoc and evil —and explains Richard Ramirez — you can fairly simply go from watching 30 minutes of Greg Tanaka to saying “Greg Tanaka is in cahoots with the devil”.

At minute 29 Greg says something about wanting to reform policing here but avoiding the Stanford prison experiment. he says that in Eugene OR there is something called Cahoots where a police officer is also trained as a fire fighter and would keep a spare uniform in his car, and change it in the case of an emergency; he also says he is looking forward to “a thousand flowers blooming”.

He says Stanford prison experiment was stanford students and grad students acting as police which led to abuse.

Has anyone seriously tried to apply lessons of Zimbardo to Black Lives Matter?

Zimbardo is alive — is he speaking out on black lives matter?

What about Ron Jones and BLM?

I used to get beat up going to school just because I’m Asian, plus it was sort of a rough neighborhood.

Is it possible your father was pulled over for a vehicle manuever and not because he was Japanese?

His father works as an extra in Hollywood for instance was in “Minority Report” — not sure I would take that as true until verified, either.

I could title this essay “Greg Tanaka’s satanic ‘minority report’”

So it is not true that if you grew up in Northridge that it is the equivalent to growing up in East Palo Alto.

Northridge also has a university, and nineteen other schools.

I’m sure your counterparts in leadership in Northridge would be aghast to learn that you describe their city as the home of notorious murder Richard Ramirez.

This riff does not make you seem accomplished or self-made.

It makes you look like a total goofball or moron. Your Ramirez story, as told to Bruce, was not factual.

And I’m sorry if it is true that a group of teenagers commented on your race once in March 2020. But I doubt many share your opinion that “Driving While Chinese” is equivalent to “Driving While Black”.

In Palo Alto it was an Asian officer who battered a black suspect.

And then was promoted.

Does Tanaka accept any contributions from developers who also do business in Northridge or gave money to indicted District 12 council member Mitchell Englander?

and 1 or edit to ad: the Rolling Stones album with the word “Satan” in the title or reference to such is their eighth American studio album came out in 1967 – I only heard about them in about 1975 — and features “2000 Light Years from Home” and “She’s Like a Rainbow” which I’ve been tripping on recently thanks to the Saintly Molly Tuttle of Palo Alto doing right by. Their Satanic Majesties Request mixed with some Ian Fleming, ironically pronounced with a fake breathed “rone” like drone or cows that don’t fuck. I am not saying that Greg Tanaka fucks cows in outhouses as implied to the Supreme Court by Terry Abrahamson for Larry Flynt’s Hustler and the Moral Majority but thank you baby first amendment Jesus that I reverse that wrong. Aight?! Kentucky fuck me 1952, but born on the south side

On August 6, 1985, Ramirez drove to Northridge, California, and broke into the home of Chris and Virginia Peterson.[62][63] He crept into the bedroom, startled Virginia, 27, and shot her in the face with a .25 caliber semi-automatic handgun.[64] He then shot Chris in the neck and attempted to flee; Chris fought back while avoiding being hit by two more shots during the struggle before Ramirez managed to escape.[65] The couple survived their injuries.[66]