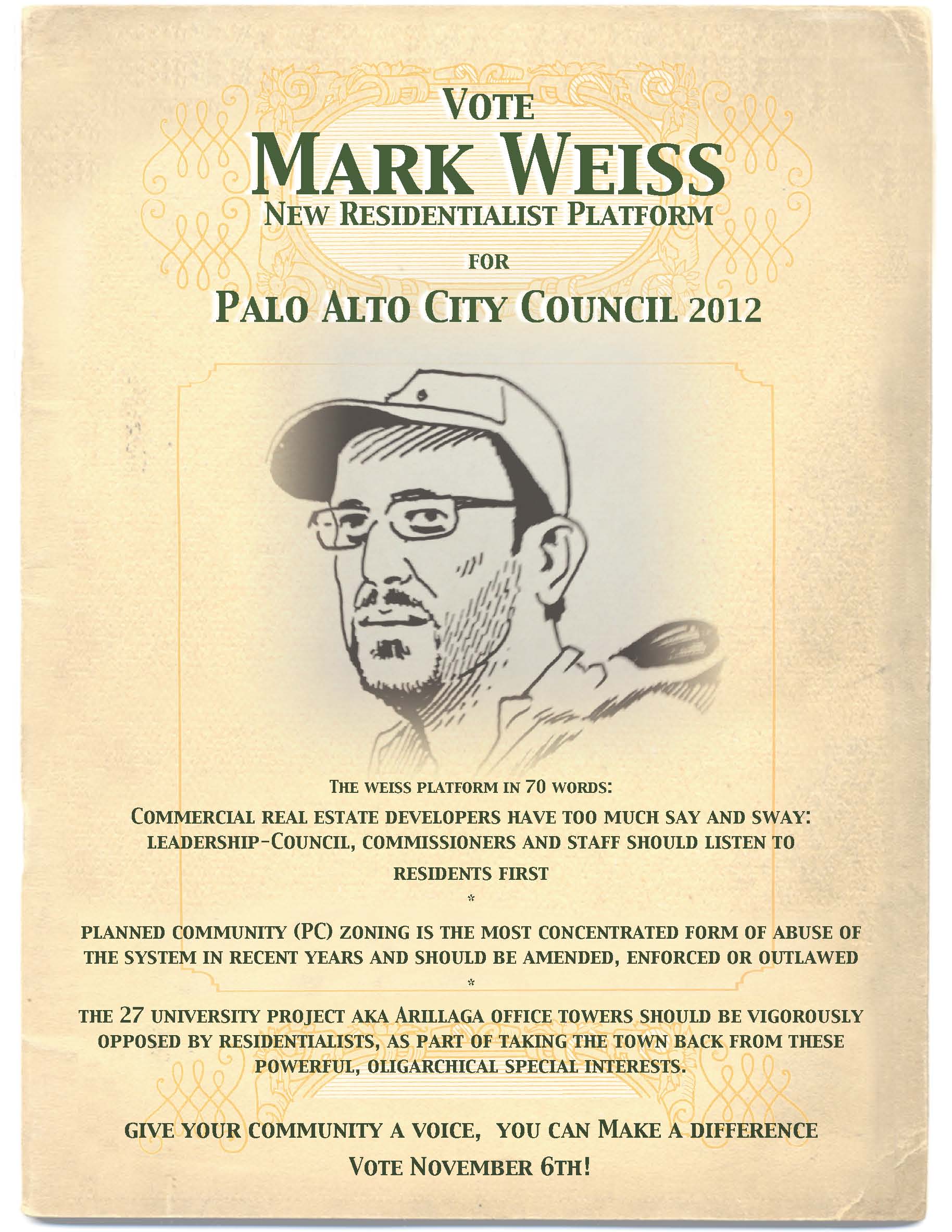 I wish to point out respectfully that your Palo Alto report is seriously flawed.  Procrustean. And perhaps too short a narrative arc.
For example you list me in a table and list me as “neither” — It is trying to compare residentialists and pro-growth.
I am arguably the founder of the new residentialist movement in that I got 6,000 votes running under that doctrine in 2012. Tim Gray* and I were the only also-rans and each got considerable support and worked with each other comparing notes on how to describe whst we felt the problems were here. I was mentored by Tom Jordan who had knowledge of the original residentials movement from 1964. I also had meetings with Mrs. Pearson who was the founder of the movement. She showed me collateral and clippings from that era which had to do with fighting Hewitt packards  movement to create an expressway for their benefit and it divides Palo Alto north and south among other effects.  The residentialists — which is not limited to the role of PASZ — in Palo Alto have some thing of a push back against Silicon Valley or corporate hegemony which you seem to miss. Incidentally Mr. Jordan mentored Tom DuBois who was successfully elected but I still contend that he and Filseth and later Kou were sort of compromises.  For example they represent Silicon Valley, the men and real estate she.
I am a bit of a red herring in that I spent little or no money and did not except contributions— I was making a point about Citizens United.
https://markweiss2012.wordpress.com/2012/10/11/weiss-platform-in-70-words/

I’m actually the most popular politicians of the generation if you look at how much I spent,  less than $2000 (in three cycles) and how many votes I got more than 8000 — I spent about $.25 per vote,  all that my money.
You may not have realized that Asher Waldfogel plays another role in recent history in that he was taken down by Rebecca Eisenberg a Stanford grad with a Harvard law degree who accused council of spoils and corruption especially apropos of his not recusing himself regarding Castilleja.
I am not claiming that my popularity would’ve scaled or that if I had spent $60,000 or what not I would’ve gotten 200,000 votes,
I also wrote a blog some of which is more relevant than others but several posts under “the new residential platform” I have another general blog that probably has 100 more articles about local policy and 2,000 on entertainment and other cultural topics. Most  significantly and on the suggestion of Mr. Jordan i opposed John Arrillaga ‘s large office tower scheme and the local papers noted that.
I know that one of your founders Layton is also the man behind the redevelopment of the Guild theater I hope that succeeds that actually is my professional interest having worked in the music Business  for 25 years in Palo alto mostly. I was the engine behind a very weak attempt for a public private partnership redevelopment of the varsity theater 456 University predating the Guild scheme by several years and admittedly I don’t have 20 million of my own money.
I was also a trainee and reporting at the Peninsula Times Tribune in 1984.
I was once a Nelson Rockefeller center for public affairs fellow at Dartmouth College.
I will report back any other more obvious conclusions from your essay.
For what it’s worth I rank my candidates in this order Rebecca Eisenberg, Greer Stone Raven Malone Lydia Kou incumbent.
Mark Weiss
In Palo Alto
Re Bergen Smith et al 3/2020
*Whereas I claim to be independent residentialist and not affiliated with PASZ Tim was more integrated in that he was the treasurer of Lydia Kou’s campaign