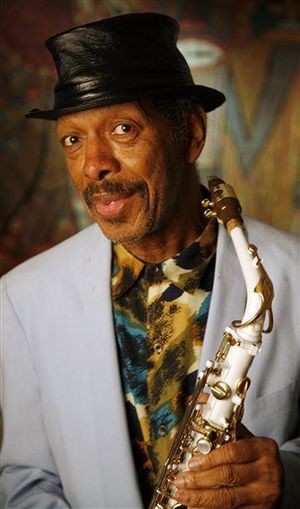 (When City of Palo Alto and Stanford University in 2006 combined to create the two-field soccer complex, the Mayfield Site, at corner of Page Mill Road and El Camino, I remember tripping on –figuratively — the little rubber pebbles that would bounce in the air when a long ball landed on the plastic green pitch; I tried to think of the field as a collection of those little black pebbles interacting with the green plastic, the leather ball, the humans, the air, history, politics. Ok, it was a thought exercise; personally I prefer God’s green grass, or natural California plants and grasses; as Tug McGraw once said, “I don’t know, I never smoked Astro-turf”. That evolved into thinking that the City of Palo Alto Twilight Concert series should try an event on these soccer fields. That evolved into fantasizing about bringing Ornette Coleman to Palo Alto to play on the plastic soccer fields –with the little black pebbles, dancing. I saw Ornette exactly once, at SFJazz, at the Masonic, on the guest list of Andy Heller, their and my sound guy; and no, I don’t really get “harmolodics” but I know it’s out there, on the Zeta horizon; and I admit that I listened to a track of Ornette and Don Cherry and them this a.m. on KCSM and did not nail it, like a sound-hound, but it did catch my ear — ????? — and I hear her back-announce the group but didn’t realize it was a tribute; later that morning, I bought the Chron and saw Ornette and his white Plastic –acrylic, by Grafton of England — Alto and did the math. The obit by Aidin V does not mention “plastic alto” or “harmolodics”. Somewhere later the idea of bringing Ornette to Palo Alto morphed into “plastic alto” as a code name, and then a couple years later I started a blog and called it such. At one point I imagined a book along the production value of Communication Arts, whose offices for years were across the street from Mayfield site, with articles on my weird mix of art, music, politics and Ornette).

(of the first 1,488 posts here, 36 mention “Ornette” according to the search function, although most of those are merely shouts; Ben Ratliff of The Times, in graph 20, mentions “plastic alto” that Ornette procured in 1954)