When Anna Eshoo our fifteen-term Congress-member and stellar rock of Democracy — metaphorical meteorite and Haley’s Comet of light exposing the swamp — was merely a neighbor or housewife or local businesswoman, my mom got invited to a meet and greet. It was around 1988, and I remember she was also in a fledgling group called Twenty-Twenty led by Brenna Bolger, I believe, that sought to have women take 20 percent of our leadership roles by 2020 — this year! I remember this well because I was working in the semiconductor industry as a junior copywriter and Brenna, who seemed hip and powerful, would sometimes drink with our crew. Apparently, my mom, Barbara Hayms Weiss z’’l gave Anna a book about leadership, and even flagged certain pages or passages with Post-It Notes. Anna told me this herself on October 18, 2018 when she spoke at Mom’s memorial at Congregation Beth Am in Los Altos Hills, and even rose in Congress with a version of this the Friday before.

I actually don’t believe the story entirely. It’s possible Anna confuses Barbara with another of the small legion of her early supporters. It’s definitely true, nonetheless, that my mother often spoke of Anna and what a great job she was doing (is doing). And I believe my parents Paul and Barbara gave to Anna’s campaigns a dozen times, usually pretty close to the limits. When I ran for Palo Alto City Council in 2014 I got a note, however, from Anna’s office saying she would not endorse me because she didn’t know me. It was not until my mom was in hospice that I tried in earnest to reach Anna, make a connection and delve the facts of the case. When my dad said “I know Anna Eshoo” we didn’t qualify that statement either. 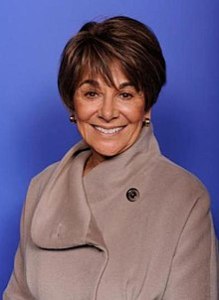 The actual book and Post-Its here — a MacGuffin in Hitchcockian terms — is not important. Although I did discuss it just the other day with my neighbor Neilson Buchanan, I cannot keep straight whether it is “Meet John Doe” or “The Man Who Shot Liberty Valance” that ends with the line that we should never let the truth get in the way of the legend.

I am writing all this in honor of Rebecca Eisenberg, a novice reform candidate for the 2021 Palo Alto City Council. I met her walking our dogs, Zoey and Duffy, I think (or Sammy — or that is Karen Holman’s pooch. Karen Frankel also had a “Sammy” I think. My dad meanwhile was a ZBT not a Sammy if you excuse the digression. Karen and Terry served on the arts commission, which is how I met Terry, when I ran…).

I had also noticed her application for commission, Rebecca Eisenberg. She is married to Curtis Smolar, by the way. They are both qualified to serve. Attorneys, parents, neighbors, smart. It’s an indictment of our system that current leadership has never put the two and two together, the matching street addresses, let alone give either of them a single nod in their numerous applications for Planning, Recreation or Human Relations commissions.

Besides having taken PayPal public and helping Reddit similarly, she was also a journalist and listed close to 100 articles she authored, mostly about tech but also, I noted, a spot-on contemporaneous review of Beck’s “Odelay” including the lyric that explains the title, which I had never noticed though I know the cd and its singles.

Rebecca Eisenberg is a Stanford grad with a Harvard law degree, where she was mentored by Elizabeth Warren (the US senator and presidential candidate).  Her father is a federal judge in Wisconsin, her mother taught school. She waitressed at 42nd Street the fern bar located a stones throw from where I sit today composing this — its in Palo Alto’s best redevelopment project, all-time —kudos to Jim Baer and Roxy Rapp. While schooling she was on financial aid — she is not an elite, except by her academic and professional record, post-admission to The Farm.

I was very disappointed that the local Democrats endorsed three obviously lesser candidates in her race; I will likely only vote, among those, for Raven Malone, unless I bullet ballot Rebecca and Greer Stone (who got 8,000 votes last cycle) and leave two spots blank. To me Rebecca is a cut above the other nine candidates this cycle.

What upsets me, grist for this mill, and rocket fuel, more aptly, is that people keep saying Rebecca Eisenberg is too loud, obnoxious, throwing elbows like Rebecca Lobo, shaking her butt too much like Cardi B, strident, uppity, hysterical and all that. Really?! Have you read her briefs? Can you find a flaw? Would you say all that if she were a man? Would you say that about your own mother? People said such about my mother…

If elected, Rebecca Eisenberg would raise the game of the other six on her Council, our Council. They need it! WE need it. My sense, with 12 years leaning in, — and arguably I’ve been in leadership– or is this dissent??– since 1976 when Jean White my teacher asked me to be on the Terman SITE Council — is that Palo Alto does not want to self-govern and is somehow okay with special interests, especially downtown landlords, calling all the shots, running amuck, in a constant and perenial rout. Yes, my, or Terry’s property has trebled in value during this term, but do you really feel that much better about the future of the planet, our Democracy, our civilization? Personally, I’m petrified. As a caveat, plese note that I quit the aforementioned career as fledgling media and industry hack when the US tanks rolled into Iraq — I was writing ads for Chevron when people like me or my age were around the corner at Broadway and Columbus waiving signs and screaming “NO BLOOD FOR OIL!”. I admit I’m neurotic as my general state of concern.

I’m inspired by Kamala Harris — who I met thru my former editor Jim Newton at his parents’ house nearby — a short bike ride from here — when his “Eisenhower The White House Years” came out — and rooting for Joe Biden — deftly, if you excuse yet another digression, profiled by Palo Altan George Packer, Nancy’s son – and thank you belatedly Nancy for endorsing me, if Anna never did — in “The Unwinding” a few years ago. But I am concerned, very concerned, if we cannot change the tide locally. Vote out Burt, Tanaka, commissioner Templeton – -complicit! Vote in Rebecca. We need people like her.

And maybe 20 years from now she will thank me for being her early supporter.

Also, I just stopped a lady, who I know by sight and used to chat up more frequently pre-Covid at Coupa — actually Duffy barked at her, in a nice way — he’s trying!!  — and was pleased to bring Rebecca’s campaign to her attention. “It’s not fair” I claimed, that people dismiss her. Likewise I stopped, with her dog, earlier this morning, L_ , a former New York Times writer, married to G_ the attorney, and she thinks, from my description of Rebecca that their kids may have overlapped somewhere, and she, too, said she’d look into it.

signed,
Mark Weiss
guy with a computer on a table and a dog in his lap

and freelanced, interned or stalked both the Got Milk and the Think Different guys — mostly guys — I call it “Milk Different”, what I do

but born on the South Side

and1: I’m also recalling getting kind of a chill while watching the documentary about Harvey Milk and the riots after the Dan White verdict, recognizing a version of a cheer the Gunn basketball leaders shared:

We have the power to/

We have the power to/

We have the power to

andand: I actually reached today Professor Shapiro and reminded him of our work together years ago on Marlowe’s “Edward The Fecund” — inside joke — but also even more obscurely Sir Walter Scott, 1820, either proving the Protestant work ethic or fantasizing about Ruth Bader Ginsburg in heaven. We lost a judge but not the occupation. Nor the syncopation in the Beck Hanson -Dessa Doomtree shoot from the hip all in the writ dancing on a glass ceiling turned dance floor sense.

Andandand: I don’t know why my handheld computer will not let me link this – – wired magazine claims that anyone who ran for public office has Russian trolls – – so I will just

encore: I don’t think Rebecca would mind that I addended this tribute to include something from Anna’s office about bias against Asians:

Since the beginning of the COVID-19 pandemic, Asian Americans have repeatedly experienced harassment, violence, and discrimination by those who wrongly believe they are to blame for the virus. The Asian Pacific Policy and Planning Council has reported over 2,500 incidents of coronavirus-related discrimination across the U.S. since March. Meanwhile, the President regularly refers to the coronavirus as the “Wuhan Virus” or the “Chinese Virus.”

Over two million Asian Americans and Pacific Islanders are currently working on the frontlines of the COVID–19 pandemic in health care, law enforcement, first responders, transportation, supermarkets, and other service industries. They should not be scapegoated as the source of this virus. This week I [Anna Eshoo] voted for a bipartisan resolution condemning all forms of anti-Asian sentiment related to COVID-19. The resolution calls on all public officials to condemn and denounce any and all anti-Asian sentiment in any form and calls on federal law enforcement officials, with state and local officials, to immediately investigate all credible reports of hate crimes and incidents and bring the perpetrators of any crimes to justice.

To read a copy of the resolution, click HERE .

and less obscure than the Rob Epstein film here, as an outro, is Patti Smith “People Have the Power’ which I saw a few years ago in SF: