Matt Nathanson my modern love for his work, in a straight manly and professional way

Last time I saw Matt Nathanson was in San Jose around 2009 or so and he wrote the words “WALLACE STEGNER” on his wrist with a sharpie.
Not apropos of any other discussion here at Plastic Alto nor the previous post about Stegner here but totally randomly — assuming also free will — i was just listening to “Modern Love” a song of his on Youtube but i also put it on my phone which costs me about 10 cents in that Apple charges me $10 per month and I do just that about 100 times a month or less (Yet I sometimes worry, like one of those dreams where you are back in college but have not kept up with your syllabus and there is a pop quiz, that the $10 per month is the basic membership and soon they will be sending me a bill for like $1 per song for all the 3,000 songs or so I clicked on — and I also am worried that every time on my cable I play Boots Riley movie “Sorry to Bother You” they charge me another $17 to “own” it – they “own” us)

I posted a rambling thing on Youtube. His minions will likely delete it. So i am backing it up here.

They should bring back KFOG just to rock this joint (I played it on my secret spy guy wrist band magic music player in the cafe and i just looked like I was on the phone — I likey “Modern Love” by Matt Nathanson — and maybe I just will clear off the next three months of my schedule and play this song consecutively to win the contest!

I also wrote a bit more now i forget about just what. I think about Adam levine the guy from Maroon five. I met him once and thought he was Markey Mark. And Matt Nathanson I thought was the Argentine soccer dude, Messi.

Matt is in Bahamas apparently this week with members of Train and Sugar Ray. I was in Mexico once with some friends from College and went out on a boat with some Mexican guys and we jumped off the boat to swim with tortugas. I don’t think I am that bold anymore. and the mexican guys or guides grabbed a turtle and lifted him or her or she/he onto the boat and then released him but I don’t think even turtles want to be touched like that anymore.

I also woke this a.m.thinking of Lew Welch and wanting to start a project called Bag of Bones or Bag and Bone or Bag and Bone wherein an actual musician or performer would improvise and a human voice would vocalize some writings or poetry of Lew Welch who was on the track team at Palo Alto High in 1948 but then in 1970 or so and predating Thelma and Louise by quite a few years gunned his engines and went straight off a cliff into either the ocean or the sky. Matt I am with you in Noe Valley

I also wanted to write something about a dude named Pinball at Les Claypool’s wine room in Forestville. His real name is Dave. But he looks a wee bit like Roger Daltry and so apparently Claypool who I call Deadpool — hey what about a band featuring Les that plays Dead covers called Dead pool — calls him Pinball.

Hi, Matt, this is my first time on this site or hearing this song and it just so happens I am the 1 millionth caller – what are the odds of that? Not actually one in a million because when I first noticed this – and your overall chanel has 25m viewers, it was at 969,050 or so and I just kept sort of peeking back until i was exactly 1 million – although truth be told I still haven’t heard the song because i am in a cafe and the sound is off and unlike the people in the video i don’t have headphones — and not to be a hater or a dick but don’t Cake have an earlier video with people with headphones? But I’m sure when I actually hear the song I will like it just fine since I have been your fan since like 1995 or so — no, literally, September 1995 there is a note on letterhead of your former roommate’s office writing me about you, but i think i already knew you from the line at the soup kitchen, on Haight.
I like the mural. I married an artist and public arts commissioner. How is B? Your pal, Mark Weiss in Palo Alto — still a little too old to be hip to this internet stuff obviously Also I like the lady at :33 with her mutt — as I write this and not-listen here I have my Duffy on my lap. It sounds like you are in the Bahamas with members of Train and Sugar Ray. And no worries about not answering my previous letter about my Mom being in hospice. You were right, funeral was better without music. But no one rocks an ironic acoustic cover like MN circa 1995

They should bring back KFOG just to rock this joint (I played it on my secret spy guy wrist band magic music player in the cafe and i just looked like I was on the phone — I likey “Modern Love” by Matt Nathanson — and maybe I just will clear off the next three months of my schedule and play this song consecutively to win the contest!

And also and this part is totally real: they are playing “Sunday Morning” in the cafe now and let’s just say: where would “AL” be without MN? He even stole your look — the whole nose job thing — although you still look more like Messi than anyone does – -which reminds me, if you excuse the furtive or further digression, I did once meet or stand two feet from Adam Levine and Stanford shopping center a promotional appearance for the new Microsoft store and I mistook him for Marky Mark.

i filed this under “austistic” and “big shoulders” because i saw matt in austin and he wrote a song about chicago.

i am serios about bag of bones or bag and bone maybe it will do 12 minutes at the Clarinet Thing show next Tuesday at the Mitch. 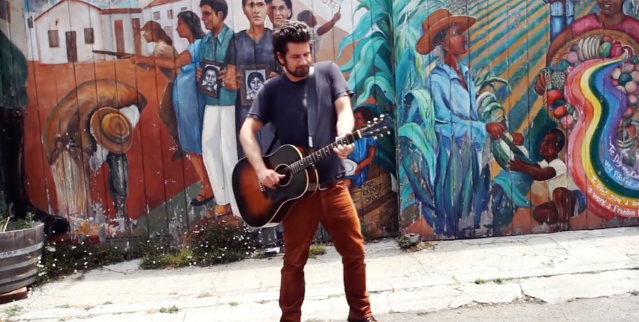