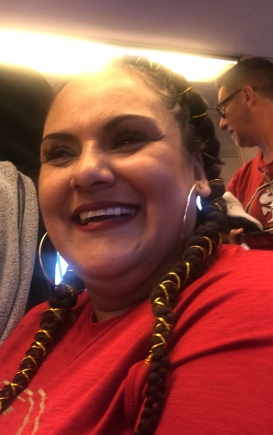 MC Hammer Stanley Burrell from McClymonds High in Oakland won the first rap Grammy, in 1992 for “You Can’t Touch This”.

Angelica sat down next to me after today’s Niners victory over The Cards. She went to Silver Creek, works for Costco corporate office in Stockton, and has two grandkids.

She wrote this rap about the 1989 Niners — victors over Bengals in Miami. She said either she was age 8 or 8th grade at the time.

Players namechecked include Keena Turner, Bill Ring, Joe Montana. Check back to see the lyrics of her rap. The 49ers should record her in a studio. (She said her father worked 49ers games for many years, at Candlestick).

(I’ve been in the music business 25 years and have worked with maybe 1,000 artists on some level and I’m always trying to discover the next big thing and  still believe in serendipity plus I always suggest to people that it’s never too late to be a artist, So it’s easy enough to imagine that the person next to me on the train after the Niners game could be queen Latifah meets Maria Muldaur plus Ani diFranco song used in the NFL films…I gave her an Alta Weiss cap  as a token or a trade )