One long tollway just heading north, and one even longer heading south 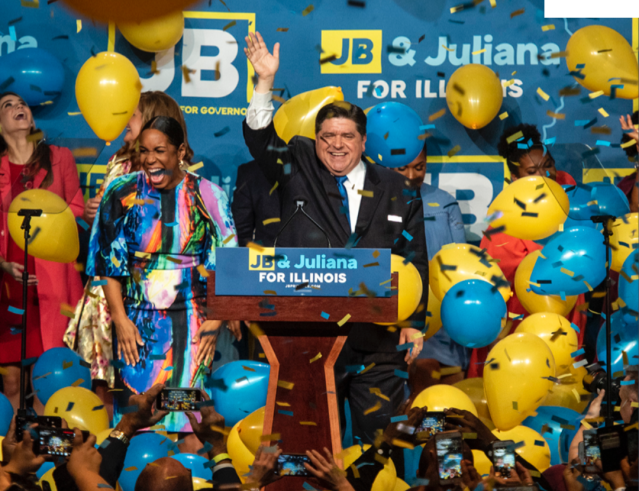 …and one going nowhere just for show…

I remember Illinois Governor-elect J.B. Pritzker at a Hebrew School talent show, in 1976 singing “If I Were A Rich Man” from “Fiddler on the Roof”. Everyone knew that his family were the founders of Hyatt Hotels. I’m not sure I had heard the song before.

When I noticed the news results, I texted Beth Am Rabbi Janet Marder with the news. Sidney Akselrad was our Rabbi at the time.

I texted Greg Zlotnick — himself a former elected official — who recalled Pritzker, that he was an heir, but not the song or talent show.

If anyone actually wanted to fact-check this, or flesh it out, so to speak, he or she could track down some of his classmates at Menlo School in Atherton — the middle school, not high school.

The next line of my proposed parody song, to the 1964 Broadway hit, is “and one going nowhere just for show” which here in the Golden State is called “high speed rail”.

this is a weird segue but Kansas 3rd district congressmember elect, Sharice Davids, a Lesbian Native American, has more twitter followers than the Illinois governor elect.

and and and: I looked it up and JB Pritzker is the third Illinois governor who is Jewish, following Henry Horner and Samuel H. Shapiro (1968). In a serious note, if I can make such a pivot, and still be in Plastic Alto, the Jersusalem Post noted that Pritzker credits his Jewish upbringing for his morality:

“I’ve often said it’s hard to separate the values of my parents and the values of my religion,” he said. “When we would go to temple and listen to discussions (in services or Sunday school), there was no difference between the things being taught at temple and those being taught at home. … It was just the basic things you learn from your rabbi and teachers are the same things we were learning from experiences with our parents.”

He is only the 25th Governor of a U.S. state who is Jewish, and only the 12th in my lifetime.

This would be funnier if he had, prophetically, sung  Da Do Rahm Rahm.

edit to add, a couple days later: leah garchik, the new herb caen, says she will itemize this. and i get thinking of getting a producer in chicago or springfield to record this with the Singing Governor. Steve Albini? Someone who worked with Patty Barber? The son of the blogger pathologist? The children’s music label? Aware? Bloodshot? Jon Langford? Maybe it’s JB Pritzker and Sally Timms?