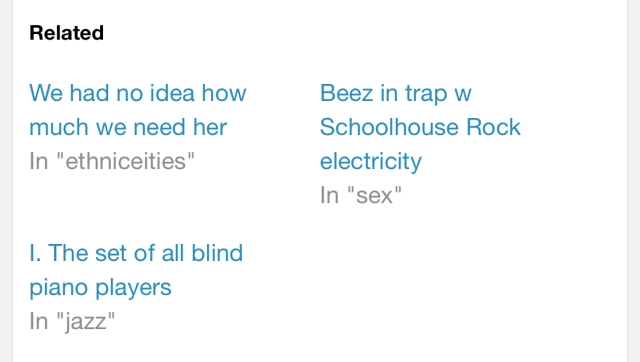 Jane  from Kansas City who works for Carol Nature Gallery Los Altos   Sent me a playlist of 160 songs but Spotify would only let me view 30 of them and I listened to the 32nd sample Of three songs.  The first was I feel it’s still my Portugal the man which is cheating since I already know the song I just wanted to hear it through my little handheld thingy. The second was Teresa TIRZAH. The third was a song name ice because it rhymes with my name and I forget who the artist is it was two people but I did a screen capture of the three titles to correct my own sloppy Blige  Ching

These are super hip contemporary songs by a young person the duration of the performance who also sells art at selected concerts and lives with people who run Palo Alto Online asked music studio even if it is electronic dance music a.k.a. EDM

1 Response to Two minutes into Jane’s world, or Spotify