I wore my precious “Steve Lacy…on tour” t-shirt today because I read yesterday that it has been 10 years since his passing, and other Steve Lacy fans did tributes in the form of concerts or blog posts.

Steve was a famous jazz musician, and the first MacArthur Genius fund laureate that I ever met, and played two Earthwise Productions concerts hereabouts, in the 1990s.

(I realize there is a limit to how many selfies I can post without “Plastic Alto” being reduced to pure self-promotion — I certainly wish I can post about Steve to greater effect than this could ever do).

I wore a Woody Guthrie shirt to Palo Alto World Music Day yesterday not realizing the significance of this time space continuum apropos of Steve. I also took a meeting with a prospective City Council 2014 Election candidate and met briefly, because we passed on street, the Chief of Police, all wearing Steve. The politician asked about him. 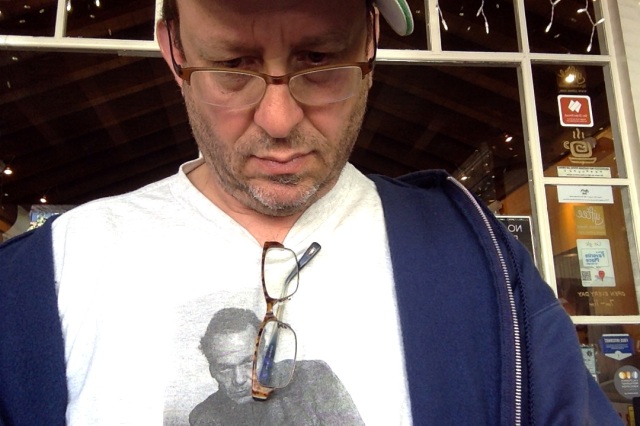 I’m also still treating my computer as a new toy

edit to add: ROVA does a Steve Lacy tribute at Duende on Telegraph (near Fox Theatre) Friday July 11, 2014, ten years after.