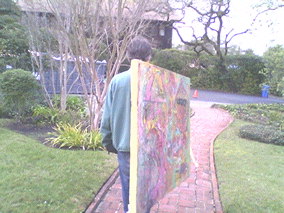 Eric Cohen is a Los Angeles-based member of the Screen Actors Guild, who you can spot in numerous films. although you kinda have to look for him.

He and his twin brother Steven sometimes appeared in my concert series at Cubberley, billed as The Flying Cohen Brothers. They juggle and dance and tell a few jokes.

They are also working on a documentary film about mathematics. (Not to be confused with Joel and Ethan Coen).

I was quite impressed when Eric recently showed Terry and I a large number of his works, on paper and canvas, that were in storage, mostly from his undergraduate days at Stanford (studied with Oliveira and Lobdell) and grad school at UCLA (studied with Burden and McCarthy).

Maybe this is part of his Paul McCarthy training, this walking around the historic San Juan Hill on Stanford campus with one of his better finished canvases.

Good luck to Eric with his future art endeavors. (And as far as exercise, besides taking his canvases for walks, he is known to enroll in tennis courses at community college or to pump iron at Muscle Beach).