Mexican wrestling mask: or, hero with two or three faces 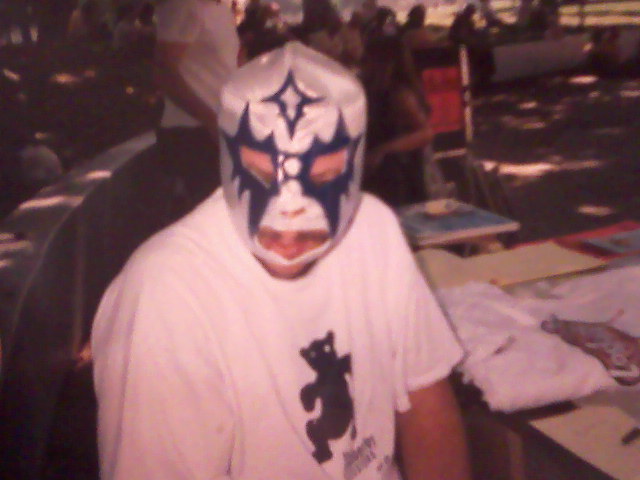 Hear Music, the retail chain that became part of Starbucks, underwrote a pilot series of Sundays in the Park at Mitchell Park in Palo Alto; the first show featured Los Straitjackets, the second Maria Muldaur, who actually replaced Blind Boys of Alabama who agreed to play and then backed out to join a Tom Petty tour, call them petty if you will — and thanks again for Danny Scher flipping through his flights book to try to convince the agent that the band could be all places at once. Anyhow, we also got a Femi Kuti show at Cubberley as part of the make-up so it’s relatively cool.

I think it was Herschel Yatovitz who took this snapshot of me wearing a Mexican wrestling mask that Los Straitjackets were trying to sell.

I thought to dig this out of my archive after viewing the Mexican photography exhibit at SFMOMA. Also, here is a link to a great book you can buy here or there (SFMOMA), of “Lucha Libre” by Lourdes Grobet.
http://www.amazon.com/Lourdes-Grobet-Lucha-Carlos-Monsivais/dp/1933045051

The other artists who played in that short-lived series included Kary Walker and Holcombe Waller.

I also wish to point out that I am wearing one of the Cubberley Sessions t-shirts, from Cinder Block, and Jon Hess, that featured Cubby the Cub Bear our logo, that I lifted from a 1909 Mordecai “Three Fingers” Brown trading card — it’s a quasi-official Chicago Cubs logo, from what I can gather, but it looks more like Tlingit art that official MLB iconography, mixed with Edgar Allen Poe “Gold Bug”.

2 Responses to Mexican wrestling mask: or, hero with two or three faces