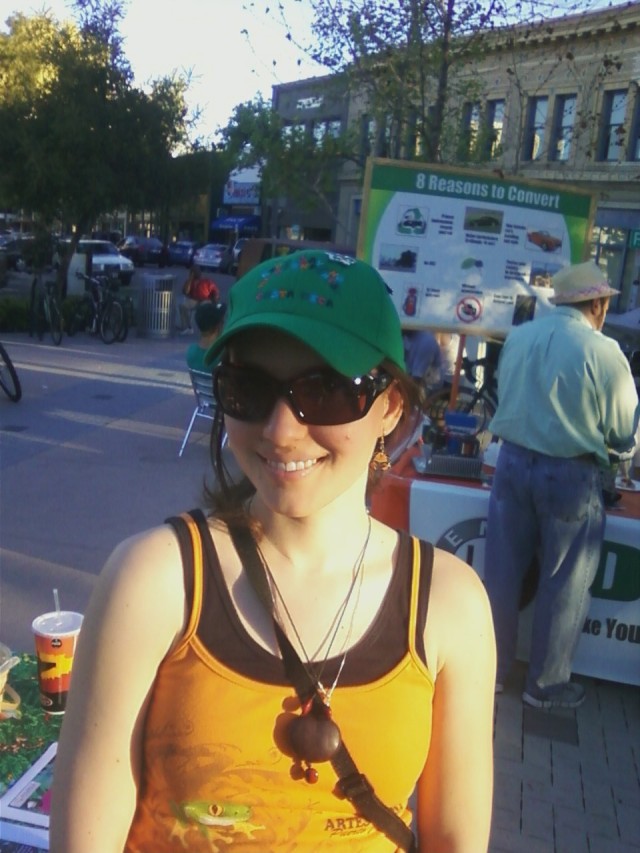 Earthwise Productions my day job predates “Plastic Alto” the blog by about 17 years and is a spinoff of Bay Area Action which produced a large Earth Day event in 1993, I worked on. In 1997 for Earth Day I produced the Earth Day Rock ‘N’ Bike which featured a new band called blink 182, at Cubberley Center Auditorium, which is now a library.

The blink 182 show was $6 all ages, but two-for-one if you rode your bike. It drew about 150 people, for their NorCal premier or at least their first tour through these parts. (They returned to the area about six months ago, re-forming, and played a show for a car sponsor and charged about $60 per tickets, to mark how times change, for them if not for me. Twenty dollar lawn seats, according to Jim the Critic and my favorite search injun, but the show also included Weezer).

I spent about two hours at the Palo Alto Downtown business and professional association’s Green and Clean Street Scene event Friday, a second annual, then popped in on the movies across the street to catch Howard Hawks’ “Twentieth Century” and “Scarface” with Paul Muni.

The Lytton Plaza event included live music by Dave Hydie and Skee, and a drummer. They were not paid to play but they were given temporary safe harbor from the new crackdown on noise and amplified sound.

I chatted with Carissa from Lyfe the restaurant about her green healthy juice we sampled, but also about her Navajo cuff silver with coral — I am never completely on the clock or  off the clock with any of my many jobs and preoccupations –perhaps like the Philip K. Dick story or character or strange phenomenon. On supposed behalf of Carissa, I actual texted Navajo jeweler Cody Sanderson trying to i.d. the heirloom piece, with a stamp “JL” but he had “no idea.” Did later find this list of hallmarks, including a Jeff Largo, and a book on topic by two Joe Lowry’s but that all seems like a red or corral herring, and definitely off topic from Green Scene et cetera.

I talked to Jan Merryweather from Acterra but mostly about Stanford tennis and British beer.

I bounced about 20 mostly lame advertising ideas off of Russ Cohen of PAD including that we should dress the downtown beat cops in ceremonial garb to simultaneously deter crime and stimulate business. Think changing of the guard at Buckingham Palace meets Matt Damon Texas Ranger from “True Grit”. Russ’ quick revise was: just put them in brimmed caps. I was thinking giant toy guns that you pull the trigger and out comes a flag reading “SHOP”.

Which segues to my personal highlight meeting the 27-and-3/4s-year-old grand-daughter of former Mayor and ad whiz Jim Burch, Kristina Lindsay who traveled to Costa Rica with an NGO that wants to teach kids the importance of the rainforest and all the little live things therein. She said that her likeness is on the artsy Palo Alto Shuttle makeover along with a quote bubble “Are their any other rock stars on this bus?'” She was probably the biggest rock star at the Lytton Green 4-20 shindig, no disrespect for Hydie and Skee, and I should know as I am a great talent spotter as my blink 182 anecdote should show. So look for Kristina Lindsay and her collection of stuffed monkeys at your better marketplace of ideas and unlimited public forums while supplies last.

edit to add, rounding out our green weekend, and slightly saddlesore from my bike, I upload this Selby Lang found object beachplastic photo, from Natoma Street in SF, 2010, as compared to the recent and current installation at Bixby Park we admired yesterday, a Monet homage called “Lillies”.  Mr. Lang told me a cool story about Abbie Hoffman. Judith Selby Lang and Richard Lang.