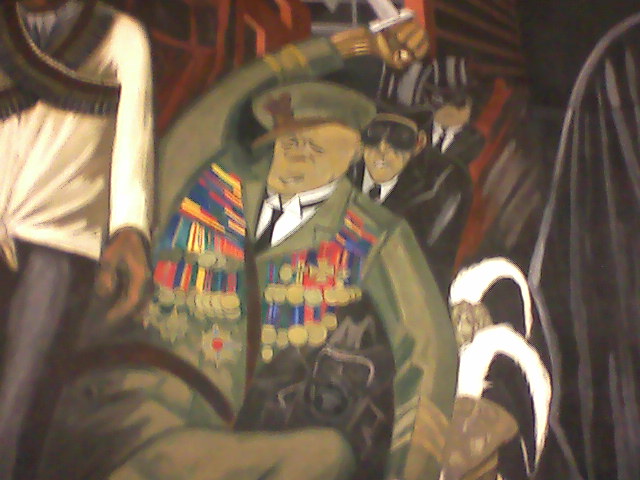 My mom recently had given me a medal that belonged to her father, Henry. It was from the Rochester, New York Veterans committee honoring “Popsie’s” role in serving his country — our country — in World War I. Henry died in 1974 at the age of 80 or so, so would have been in his early twenties during the First War. I don’t recall him talking about his service much accept he may have said that he learned he was allergic to penicillin during that time and that he turned bright red and they thought it might be scarlet fever.

When the house I was renting on Chimalus Avenue in Palo Alto — in Barron Park — was burglarized in February, 2008 — Friday, February 1, 2008 to be exact –among the items pilfered was Henry’s medal. (The chief loss was of a binder of rare baseball cards, from 1884 to 1962 or so, mostly Topps late fifties superstars –Aaron, Mays, Koufax — but also tobacco cards and gum cards including those featuring Cy Young, Christy Mathewson, Mordecai Three Finger Brown and Lou Gehrig — a 1934 Goudy “Lou Gehrig Says” Gehrig — I bought for $35 at a card show when I was about 11 and supposedly worth $3,000 now — that I had pledged to sell off in part and donate some of the proceeds to a fund for a deceased former athlete — The Danny McCallister Fund — but I digress).

I am also thinking of a picture of Patti Smith that ran recently in New York Times Magazine that showed her with a bunch of medals she must have picked up at second hand shops. I am thinking of Antiques Roadshow, as well. Or Harry Hillman’s three Olympic Gold medals from the 1904 St. Louis games (and Worlds Fair) that are hanging outside the track and field coach’s office at Dartmouth — a five minute walk from the Orozco Mural. (I did not see them in June, 2011, my 25th reunion but saw them and shot them in November, 2009, in town for a funeral, a different funeral.)

The Patti Smith medals photo does not suss up easily; but I did find here that her National Book Award for “Just Kids” included a medal.

I was going to write about Orozco vis a vis my newfound interest in public art and murals — here in Palo Alto we have Joey Piziali, David Huffman, Mohammed Soumeh and plenty of Greg Brown — but flashed to the medals instead. I think Orozco’s intention in this detail was actually critical of the militarized new hemisphere not reverential. Also, I am not sure the significance of writing about art, Orozco, Dartmouth, WWI, medals, the fallen or capitalism is on Rosh HaShanah. I know that Yom Kippur is next Friday night and Saturday day and I doubt I will be posting a blog during that window. I also know that Henry’s yartzeit — honoring the anniversary of his death — is coming up in October and we occassionally attend synogogue for that, and I have a meeting coming up with Rabbi Janet Marder of Beth Am to discuss the benefits of a unmarried person re-joining the congregation. Also, on this Jewish theme –for Rosh HaShana — I did recently speak with the administrator of a synagogue in Chicago — KAM Israel — that holds a Judaica collection donated by my other grandfather, my namesake Mort Weiss, “Pop-pop Mort”, that needs some tending to, in the development sense.

On Rosh HaShana, like this blog, it is written.