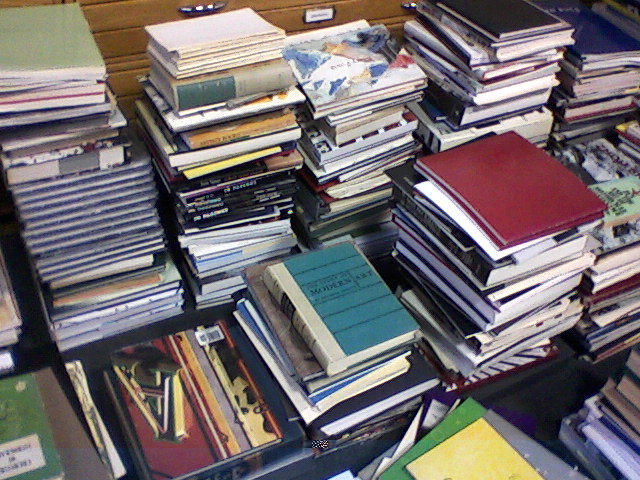 These are Jack Lemmon's books, after some gravity problems at Landfall Press in Santa Fe, NM, home to works by Terry Allen, Christo and Claes Oldenburg

edit to add, Monday, Sept. 19, 2011: Here is a link to ArtPlace, the so-called venture capital firm for arts. The New York Times article lauded NEA chair Rocco Landesman, the Broadway promoter, for his role in finding creative ways to support the arts. The local papers listed Intersection for the Arts as one of several local recipients.

OR: 12-STEP PROGRAM TO COOK UP THE WINNING FORMULA IN PITCHED FIGHT BETWEEN DEVELOPER AND THE PEOPLE

I of course am hoping that this news is seen by commissioners and council members in Palo Alto who are considering being pro-active and creative on how to lift the curtain at The Varsity Theatre. I took the night off from City Council. I am writing several drafts and plans for future documents and tactics.1) I went to Freight and Salvage Saturday, for Country Joe McDonald’s tribute to Woody Guthrie and a quick pow wow with Steve Baker, all informing and inspiring my work on TLPW456.

2)I saw James McMurtry at Slim’s on Friday and invited him into my Stegner tribute project, and incidentally gave him a “The Last Picture Waltz” business card as my contact info. He said “Wallace Stegner was my dad’s teacher when he [Larry McMurtry] wrote his first book.” He added that he had recently read “Recapitulation” but found it lacking compared to “Angle of Repose”. I said “but can you turn that into a song?” and he indicated that you cannot force such things.

3)On Saturday I also went to the Echelon Gran Fondo of Palo Alto bike event and food tasting, made a small donation to Kiwanis of Palo Alto, and spent about five hours schmoozing and brainstorming on various interrelated arts projects, not limited to TLPW456.

Borders is gone gone gone. Good riddance! Although I guess that means the clock is running for the grass roots proposal to stop the office space proposal in favor of something with a public benefit like concerts, films and public meetings.

4) On Sunday I went to a Midtown Residents Association annual party, as a guest, I guess, or inter-loafer, and had several illuminating and generally invigorating talks with people on these issues. Also, 5) I saw Alex Ippolite of Palo Alto International Film Festival and furthered my idea about either taking a group to a showing, or maybe helping to find a panel or host for a film.

6) Last week, I went up to SF and ended up doing an installment of Beat Hotel Rm 32 Performs Howl with a young singer-songwriter I met there named Jim Byron. We were in front of Caffe Trieste. I ran down to City Lights to procure yet another edition of “Howl.”

7)I went to a Giants game to meet my childhood friend from Saratoga, Calif., Andrew Dieden, who was organizing a pre-game event on a recovery theme, and saw his cousin perform, Colin Dieden of the Mowglis, an LA-based pop band that reminds me a little of Camper Van Beethoven. Colin’s dad, I sat with for a few innings of a Tim Lincecum win, Michael Dieden is an Bishop O’Dowd alum (and hoopster — he’s a hoopster hipster) who helped develop the properties surrounding two East Bay BART stations and worked for an early Jerry Brown campaign.

8) Back here in PA, I met a neighbor’s daughter, Nora Williams, a Stanford and M-A grad who is violin with Red Riding Hood and a symphony in Chicago.

9) I popped in on Jeff Adachi’s kickoff event, at Verdi Club in SF, and also went by their campaign HQ. I am hoping to put in a wee bit of time for his bid for Mayor of San Francisco. At the Palo Alto picnic I told Chief Dennis Burns that I saw some real leadership potential in our agent Robert Parham, a Dartmouth grad with tenure in the U.S. Marines, but admitted “I am no kingmaker.” I said there was a particularly well-known in SF political circles Dartmouth alum who I thought would be interested in meeting Agent Parham.

10) I rang the former Dartmouth lineman and now builder Greg Hulbert of San Mateo and had him re-tell his stories of his days as a concert promoter working with Jerry Jeff Walker.

11) Am meaning to get some progress on the proposed 50th Anniversary of “Lami” by Alden Van Buskirk, tentatively scheduled to include Matt Gonzalez, Jack Hirshman and David Highsmith. I also am going to design a flyer for Aleta Hayes’ fall class and arts project Chocolate Heads and try to get off academic probation at Foothill Project by enrolling in the macro economics class taught by Brian Evans (my Gunn basketball teammate, SCVAL champion, and co-founder of our Fantasy Football league).

I have to prep for my interview for Palo Alto Planning Commission, and prepare for the Historic Resources Board hearing on 456 University, which is October 5. My talmud class is off until later that month, after the New Year.

12)Rob Syrett and I are doing on spec a poster for Matmos So Percussion, at Stanford coming up. Reminds me that I also caught Donny McCaslin with Uri Caine at Pete Douglas’ Bach Dancing and Dynamite Society. Rob will have a show at years end at Caffe Central in South Park in SF (near the ballpark).

My unread books stack is way up there again; my magazines look like kudzu.

2 Responses to consortium views arts as engines of recovery