“I’m really not much of an artist, but here you go”, he wrote. A graduate of local schools, he is a small business owner with tech acumen. He is the youngest candidate in the contest.

Provisional to input from the judges, I will score Brian Hamachek 50 points on a 100 scale, for his 23 second version of Train’s “Hey Soul Sister”.

Two other candidates asked for an extension. A third candidate, through a spokesperson, was offered a substitution in songs.

Realtor Alex Comsa, a Romanian emigre who has also worked in tech said he identifies with sports culture and world soccer, to the exclusion of arts — if he is reading this he can substitute the Liverpool parody song about Mo Salah, sung to “Oh Sit Down” by James.

this is too long of a digression but quite a story; James’ “sit down” is an excellent example of my aspirations for how art can make the world turn, at least in other countries but strangely not yet here.

edit to add, hours later: this just in

Julie Lythcott Haims : 🎶 and the race is on 🎵 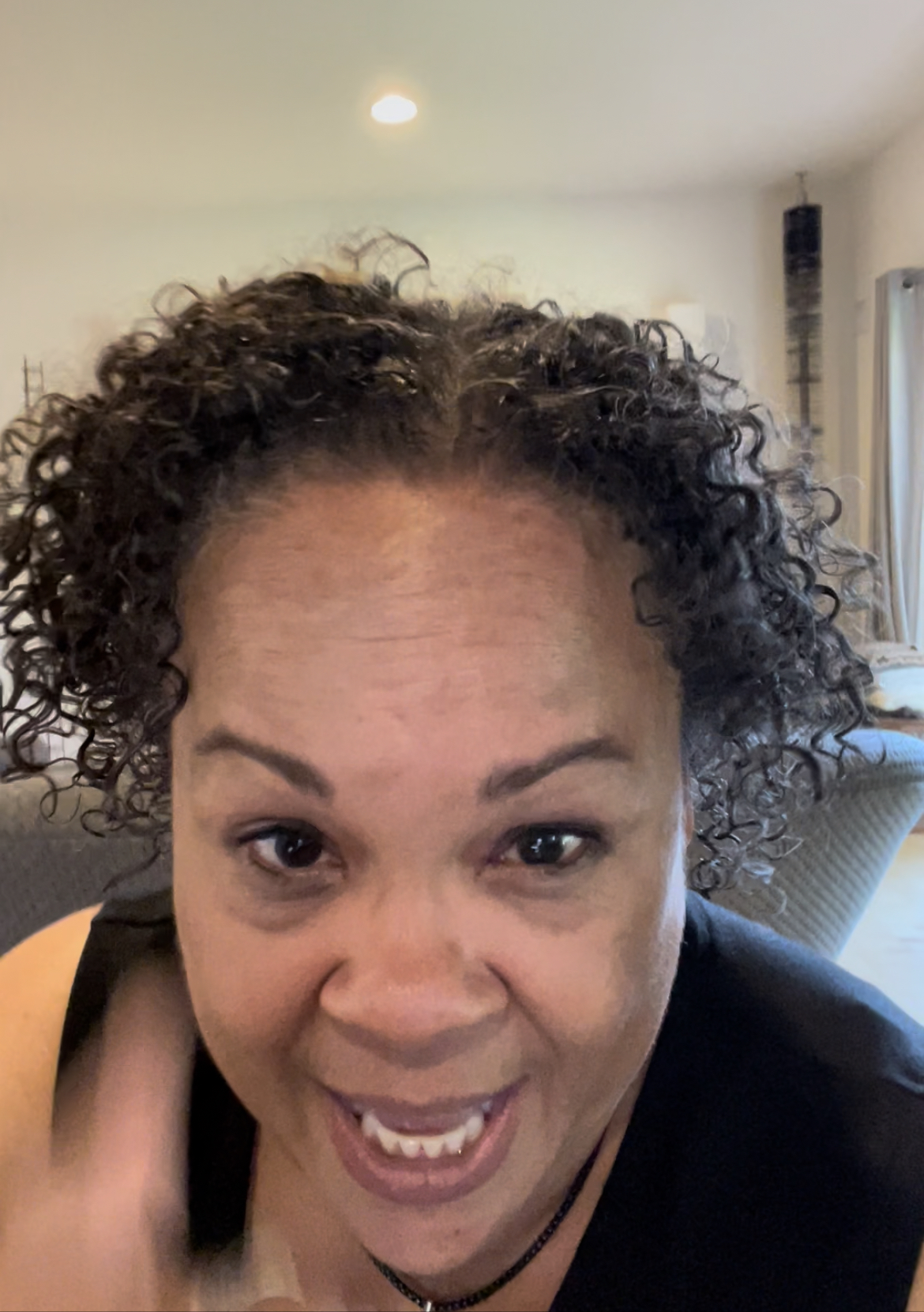 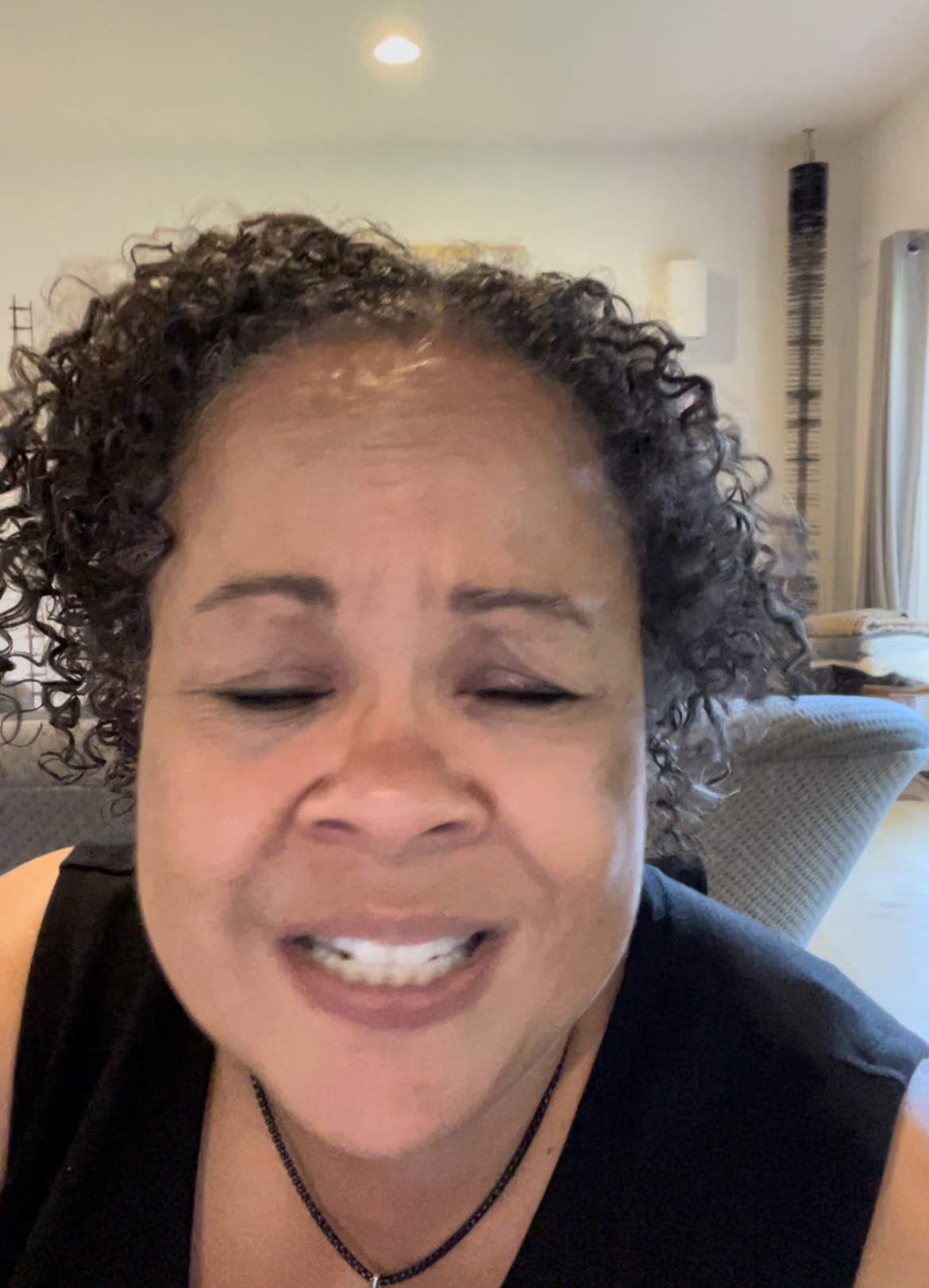 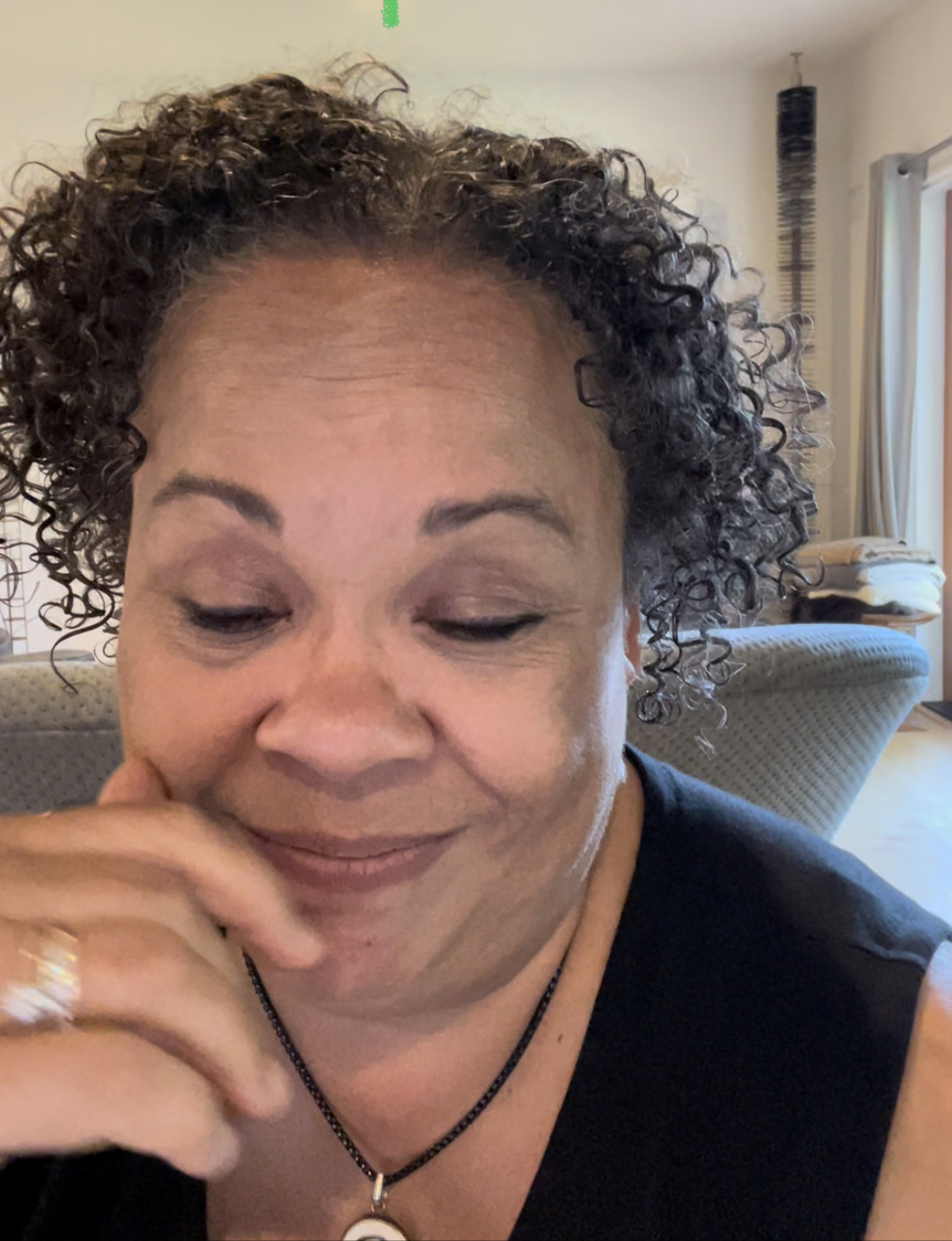 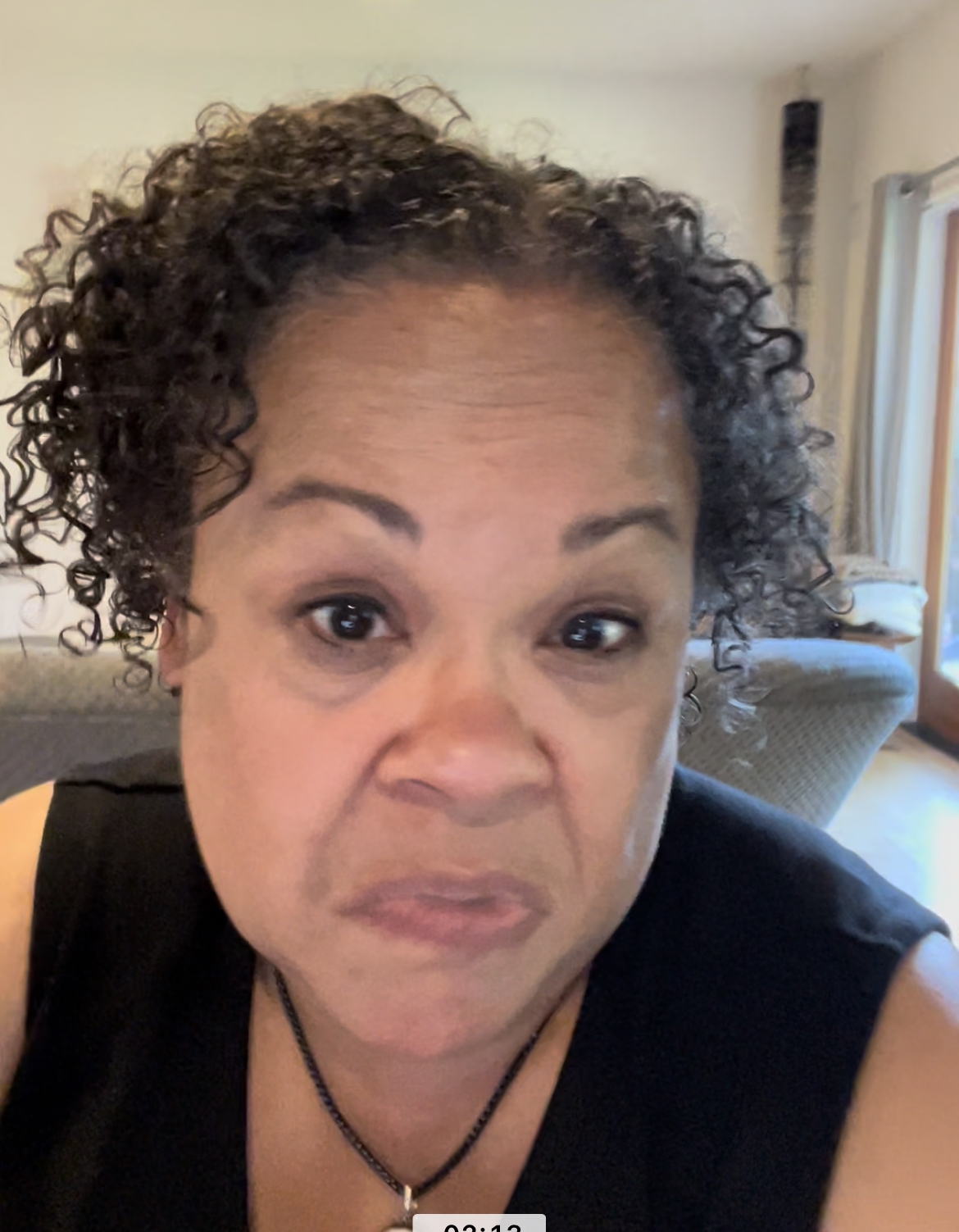 Posted on September 16, 2022 by markweiss86
Posted in Uncategorized | Leave a comment

Mads Tolling group the next night, same place. Someone who got a 4.5 star review in Downbeat and my contact info named Chase Elodia and friends, from NYC, will be playing after. Two. And or three; (was “might”, upgraded to “will” — stay tuned — Mads is scheduled for 5:30 to 6:45, Chase is from 7:30 to 9ish. Especially at these outdoors shows, we try to be professional but cannot control all the chaos). Chase Elodia, drums, Claire Dickson, voice; Theo Walentiny, piano; Eytan Schilinger-Hyman, bass. 9/29/22

On October 6 at Lytton Plaza I have a trio with drums, bass, sax; the bass is from Mexico and is a woman and might also sing. six Greenlief  Torres Amendola. 10/6/22

Ben Goldberg clarinet and Liberty Ellman guitar for Lytton Plaza on Friday October 14. Seven. [Check back to see if I end up with six or seven shows at Lytton Plaza between September 19 and the end of the summer, Indian summer or fall). 10/14/22 rain or shine kinda rooting for rain

Philip Greenlief just texted me, 3:38 on Monday, September 19 “just got off the plane from Mexico City” which I interpret has something relevant to his upcoming show with Mexico’s Adriana Camacho Torres; also, people here in the 650 will know that it has rained a bit recently — I don’t think it will impact my shows. Nor did the heat wave. The first show of the year, Dan Bern in March, it rained but the crowd was modest enough that he invited them to stand close to him under the canopy.

Doria lauded for her ‘FWA’

San Jose Mercury lauds Pablo Cruise as an all time great, in advance of their Palo Alto free show Saturday 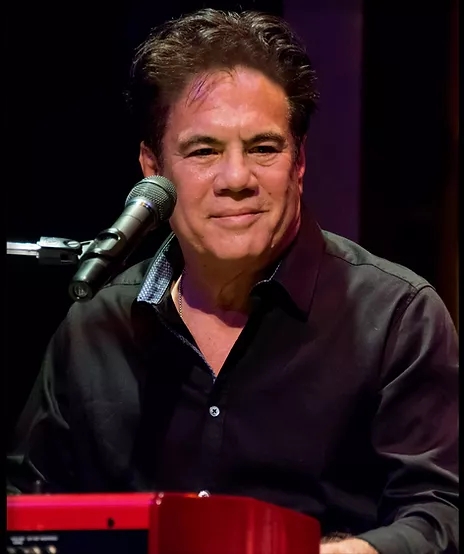 Pablo Cruise doesn’t often get its due.

Yet, spend some hours grooving on those cool pop-rock albums from the ’70s and early ’80s — especially the platinum-plus-selling “A Place in the Sun” and follow-up “Worlds Away” — and it should soon become apparent that Pablo Cruise ranks among the best Bay Area bands of all time.

The group, which formed in 1973 in San Francisco, delivered so many groovy tunes during its heyday. Fan favorites include “Love Will Find a Way,” “Cool Love” and, of course, “Whatcha Gonna Do?”

Pablo Cruise has always been equally about big memorable pop hooks and outstanding musicianship, having featured so many great players over the years — including the late great Bud Cockrell, who made our list of the Bay Area’s all-time best bassists.

Lerios happens to be a Palo Alto native, so he’ll be making a true homecoming when Pablo Cruise performs a show at 2 p.m. Sept. 3 at Mitchell Park in Palo Alto.

Visit www.pablocruise.com for more information on the band.

Jim Harrington of the San Jose Mercury and related publications is at this point a veteran rock writer. But in his salad days he was the arts editor of the Palo Alto Weekly, circa 1995-1999, and even put me on the cover once; I was wearing a Goldfinger t-shirt at the initial shoot, but they had to do it over because I flashed some fake gang signs, making a “W” for “Weiss” or “wise” or “world”, or maybe it was “live long and prosper” from Star Trek.

Steve Cohen, a friend since high school and also a SAG actor, today remarked that Jim Harrington also profiled he and his twin Eric, when they were in the original cast of “Ally McBeal”, as the Dancing Twins. I had booked them as either Flying Cohen Brothers, Steve and Eric Cohen or Hunter S. Thompson Twins (as recently as November, 2021 — they dressed as the journalist but lip-sunk and danced to “Hold Me Now”).

Jim also once profiled my office assistant, Allette Brooks, a recent Stanford grad who sang like Ani DiFranco. I thought it was weird when she mentioned that Jim made her play at the interview, like an audition.

I also thought it was funny or just weird when Jim told me once, sitting in the lobby of the old PAW on High Street downtown, when I handed off a press photograph of Pansy Division, an indie band on Green Day’s label who were out of closet gays, that he had never heard of them because “as far as new music I take up the rear”.  (Compared to, I was just reading, this morning, an anthology of Robert Christgau reviews from the 1990s and I noted that he gave Pansy Division a passing grade and quoted a lyric, I’m paraphrasing, we are the buttfuckers of rock and roll/We want to sock it to your hole”.

Which also reminds me that I am potentially looking for an opening act, so to speak, Saturday.

Thanks, Jim. Or as I said in our correspondence, “good job” — you should be thanking me for providing content.

And just to remind readers of Plastic Alto: the Mercury was once a local paper affiliated with the Hayes Family (i.e. Mayor Janet Gray Hayes, my old teacher of advertising Al Hayes), and then for a while was a Knight Ridder paper (related to the Philidelphia Inquirer, a leading paper), but more recently is owned by someone or some thing that was on “60 Minutes” for buying up newspapers and destroying them.

I ran down to Mac’s Smoke Show this a.m. to buy the Mercury (and two other papers, the Chron and the Times) but did not see the article on Pablo Cruise that Jim hinted was coming — he had asked me for a photo. [Editor: The next day went back to Mac’s bought the Merc did not see the article concluded that it’s only on the Internet or his social media].

But he wrote back with a link with the above six or so graphs. So I assume it will be in Friday’s Mercury but you know the old adage, when you “assume” you make an ass that will potentially be exploited by the “sock it to your hole” crowd.

Earthwise, I will remind you, was started in1994 as a push-back against media. I was a refugee from both the ad agencies (of SF and Silicon Valley) and the print media. Years later I am certain I am the only concert promoter who doesn’t use any of the major social media platforms, either personally or for business. I first had this idea in 1995 or so but one day I’d like to book a very popular band and just write on a piece of paper the name of the band and the place of the show and time and that would create a word of mouth that ensures a sellout. In all cases, and going forward, I count on posters and flyers more than ever. (And I see the cognitive dissonance of using EventBrite, yahoo mail, texting via my Apple smartphone and this blog, on WordPress — someday, I will quit them all, and be famous for my epic posters and flyers — this is all a comment on media as much as a social practice of “community building”). Maybe my media theories are influenced by having studied Martin Luther at a liberal arts college, he of the nailing to the door the news.

Or: love will find a way, as someone once said. And will say again, likely, Saturday, about 42 hours from now.

Jim Harrington of the Mercury tweeted to his 59K followers the news about his article, about the show, and added an original tagline that references another Pablo Cruise song: 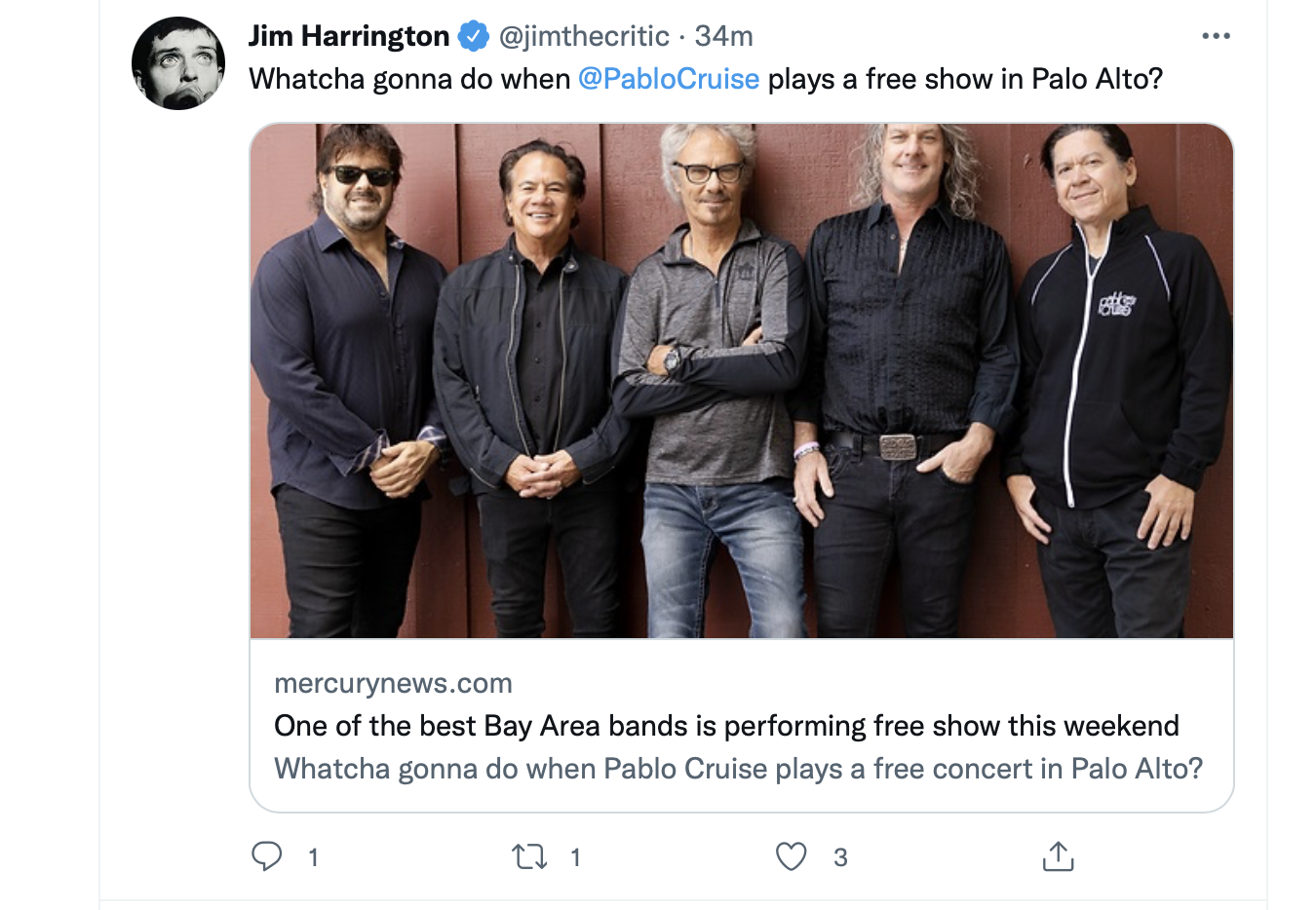 What am I going to do? Wear sunscreen.

Edit to add, again, Friday: This almost fits here as a comment on the media and pop culture it was originally posted on Ted Gioia’s sub stack whatever sub stack is:

OK excuse me if I run with this a minute or as my fellow fellow Palo Altan about to debut at the Warfield Remi Wolf would say “quiet on the set, run it”: In 1977 I was a seventh grader at Terman junior high and KYA radio had a contest with soundbites to spell out their slogan something like “the best news the best music K-Y-A”. You had to identify the nine soundbyes or listen to the previous contestant and pick up where he or she left off. I forget the prize but it was a sensation. My friend Andrew Zenoff son of a business school professor called in and guessed wrong for the big money. The final clue or final part of the puzzle was a fairly obscure song from six years previous Brewer and Shipley “One toke over the line”. Which if you strip it down to just the long “a” sound in “station” is even more obscure, near impossibly so. I’m producing a Pablo Cruise  show tomorrow in Palo Alto which has me thinking about all this when AM not FM or the Internet was your source of new music as Mr. (Bob) Greene says in your example from 13 years before that.

It will be interesting to me hearing these Top 40 songs live for the first time since 1981 at Frost if it will sound different or I will realize a deeper meaning than WYSIWYG. Wyhiwyg?

David Katz Nelson has something in his feed about buddy Bolden and the word “funky”.

‘School of Rock’ Vs Pablo Cruise

Monday, 9 am — at work all this week advancing my Pablo Cruise. Show. Look for our flyers in the windows of hipper Palo Alto and area stores.