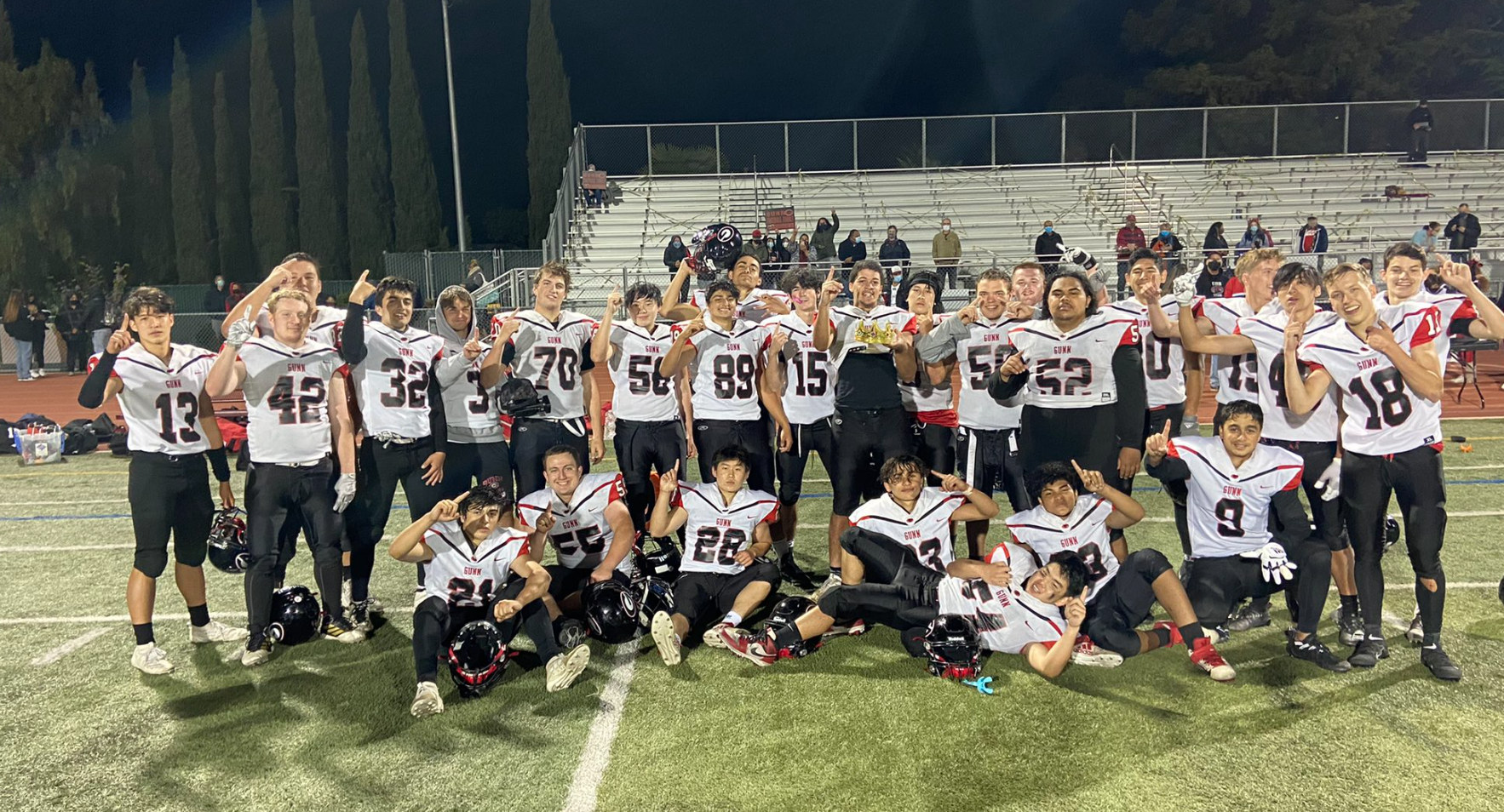 Gunn after Cupertino game, April 17, 2021 including Erlan (79 second row, obscured) and Jackson #4, also obscured or his number is)


Gunn beat Cupertino 65-21 last night on the road to finish the season a perfect 5-0, its first undefeated league championship since 1971.

Paly lost to Los Gatos, to finish 2-3, a losing record. MaxPreps had Paly, in a stronger league, rated #16 in the CCS to Gunn’s #23, but I think the final results, however they are calculated, should show the Titans eclipsing the Vikings in the final tally for spring, 2021 football, and being a top 20 team in the 100-team CCS. Maybe Gunn is top 10, if this year, without playoffs, can give the benefit of the doubt to strivers and dreamers.

Gunn’s result pops in the sense of the futile history of Gunn gridiron. Also, I would argue that if Paly is known as a sports miracle part of the success story is at the direct expense of Gunn; the fates — doormat on one side, exemplar on the other, are linked. So beyond just the result of a rare championship, I think the significance of Jason Miller’s 2021 squad is that it seems to have put to rest the Viking football dynasty. In fairy tale terms, he kissed the sleeping beauty and broke the curse.

If you flip a coin five times the odds of getting heads five times running is one-in-32. That is, given that there are only two outcomes in a high school football match, if if were pure chance to go 5-0 in even a short season, this year’s outcome would be expected every 32 years or so. But Gunn’s football aggregate over 55 seasons is more like 33 winning percentage than 50-50, so a 5-0 undefeated season is more like a 1-in-300-year event. Think: 1969 Miracle Mets, Leicester’s EPL championship, the Miracle on Ice. As in, it’s a good thing that the 2021 team does not use randomized features from its history, say, a guard from the 1982 team and a outside back from the 2008 team. Gunn did and did not play last night with history lining up in the double wing-T backfield.

Jason Miller’s 2021 football champions deserve a mayoral proclamation from Palo Alto’s Tom Dubois, a former Gunn dad — his daughter played for one of the best volleyball teams in school history. Gunn also had an outstanding result from soccer in 2020 – -being the first team from a relegation league to win the overall CCS championship. There’ve been results from water polo, wrestling and swimming, girls and boys, in recent history.

It is not true that Gunn is good in academics but bad in sports. Gunn is more like Stanford which wins the Directors’ Cup for overall excellence in sports numerous times. Matt Maltz’s softball teams finished beyond expectations. (he is my Gunn classmate and was a standout in football and swimming). Chris Horpel built a wrestling program beyond just a team.

Richard Jackson led the CCS in rushing and touchdowns. Lineman Ken Erlan is also considered a D-1 college prospect, although he’s only played football for those three years at Gunn. Evan Webeck of the Mercury, in a wonderful profile, said that another player was a concert pianist.

I’ve watched Gunn football on and off since 1979, and every game of the 2014 season. That team had eight excellent players that played every down and another 16 who subbed in to make contributions. Nozo, Sweat and Kasznik could have started on any team in Gunn history, but the story became would they finally win a game or would they forfeit for lack of bodies?

Gunn has 28 players this year — Paly, which used to suit 40 or more – -had about the same. Besides knowing the game — for example, choosing a run-oriented offensive scheme that suits his lineup; and using the internet, he says, to borrow a defensive scheme to shore up his weaknesses there — Miller is known as a leader, teacher, role model and, fitting with the times, an anti-racist. He said that he was proud of his players attending Black Lives Matter rallies even though he may be the only Black person they know.

I think in recent years, especially when Earl Hansen coached at Paly, a Black South Palo Alto athlete like Richard Jackson might have enrolled at Paly. Its a trivial example, but Miller’s presence on Arastradero restores my sense of social justice a propos the local sports rivalry; it eliminates the temptation to go turncoat, as many kids have done. (See: Jim Harbaugh, Jeremy Lin, for example and maybe Davante Adams — he attended elmentary school near Gunn before enrolling at Paly for high school).

Maybe there could be a parade for these champs; maybe John Anderson could make available some Chevy convertibles to ferry the fellas around town, the way Tara’s NCAA ladies just did.

Gunn under Miller is 17-8 and has won 13 of the last 15. Will there be a parity reset from creek to creek, or is this an abberation? At the very least, I think this is a man who impacted dozens of young men, and —like Hans Delannoy’s hoops granfaloon of which I count myself a member— there will be gain after gain, on and off the grid. Kudos!

To Darren Sabedra of the Merc (4/16/21):
I don’t believe Gunn has ever been ranked by the San Jose Mercury in football.
If Gunn beats Cupertino Saturday to finish the season 5-0 it will be its first undefeated season since 1971 when it won SPAL. Winning El Camino division is somewhat tempered by the fact that it’s a relegation division.
What I am keeping an eye on is that if Los Gatos predictably beats Palo alto maybe Gunn will finish the season ranked higher than Palo alto likely for the first time since 2002. Or since like I said 1971. (for example in the MaxPrep rankings however those are calculated).
There’s a discussion here about the preseason scrimmage with varying accounts the two teams. Kyle Martin of the Palo Alto Post covered the event but he is not a sportswriter.  Only some accounts say Gunn was outplaying Paly when it pulled its team.
If Gunn finishes 5-0 to Paly’s  2-3, Gunn wins the mythical City Championship.
(This reminds me that in 2009 when Gunn won it’s first basketball championship in 28 years that Gunn and Paly were the only two public schools ranked in the top 10 in the CCS).
Jason Miller is obviously doing a great job…(something about Gifford that is not true…he’s actually 19-10 in three seasons)
Paly used to dominate or recruit Black athletes from the Ventura District near Gunn which should’ve fed Gunn.  Most children of Stanford staff attend Gunn but in recent years the athletic department sends its kids to Paly. Tinsley transfers from East Palo Alto if they were athletic would choose Paly but seems now there’s a distribution of them to Gunn as well.
Earl Hansen, the long time Paly coach and California coach of the year and state champion was actually from South Palo Alto, a  Cubberley graduate. Gunn’s under-achievement in major sports and football is related to Paly’s over-achievement; it was a de facto sports magnet. (Slightly off-topic but Jim Harbaugh and Jeremy Lin are prominent  examples of Paly poaching Gunn enrollment; Davante Adams supposedly attended Barron Park Elementary which is near Gunn).
Mark Weiss
Gunn ‘82
Plastic Alto blog

Gunn is 4-0 entering the final week of the season and ranked #23 in the CCS (out of 95 teams, according to MaxPreps).
Paly is 2-2 but ranked #16 due to playing in a tougher division. Gunn’s league, El Camino, is a relegation league to that of Paly.
Minpeninsula Schools ranked ahead of Gunn include Paly, Menlo, Mountain View, St. Francis, Sacred Heart and M-A.
Public schools ranked ahead of Gunn include only Los Gatos, M-A, Wilcox, Aptos, Mountain View, Half Moon Bay, Oak Grove, Burlingame, Paly,, Live Oak of Morgan Hill, christopher, Leigh of San Jose — ie. Gunn is the 13th best public school in football in the CCS.

Hey, my name is Richard I’m a senior running back/safety at Gunn High School in Palo Alto CA. I think I’d be a great player to pick up because of my work ethic and leadership within a team. I’ve been the captain of my varsity team all four years because of my leadership skills. I create zooms to update the new players on plays. I also invite players who don’t have much motivation to work outside of practice over to my house to lift or to run routes at the park. I mainly work on building a team that I can depend on rather than just myself. I also put in a lot of individual effort. I currently do two practices a day. One with my actual team which is 2 hours then the second with a personal trainer for 2 hours. I also understand academics come first. I finished this semester with a 3.2 GPA. I believe that I will always have ways that I can improve my game!

Richard Jackson, Gunn-Palo Alto: He has contributed greatly on offense and defense; he leads the CCS with 648 rushing yards and 11 touchdowns for the surprising Titans (4-0), and is also a force from his middle-linebacker spot. MaxPreps says he added 206 yards and 4 tds so by my math that’s 854 yards and 15 tds. QB Lambert led the team with 220 yards rushing at Tino.

My Plastic Alto Top 20 CCS: (partial scoring as of this morning)

So the reality is that Gunn has never finished ahead of Paly in the CCS, nor been ranked in football by the Merc; it finished ahead of Paly in both 1969 (with Akira Tana as QB) and 1971 (with Don Briggs as QB) but before the establishment of the CCS, in the old SPAL. I found an archive story that said that Justin Silverman’s 1998 team was the first winning season for Gunn since they entered the SCVAL.

Re-ordering the MaxPreps top 25 by strict won-loss and no “strength of schedule” pseudo-algorithm:

Pick 6 or VI: I will say it: Gunn Football, in this most unsusual year, is the CCS Champ in Football, according to Plastic Alto. I.e.: Gunn, #1; Serra, Los Gatos and M-A tied for second. Stick that in your arm, peoples!

vii: Rick Eymer has a summary in the Weekly or on their website. I sent this note to him directly (it was rejected as a comment per se — as are all my comments):

The 2021 Gunn Titans football are not just El Camino League champs, they are City Champs and arguably co-champions (with Serra, Los Gatos and Menlo-Atherton) of the CCS.

viii: This is from “EVA-PA” to the Weekly, who I believe is also mother of one or two of the players: The Gunn Titans were a super good team this (short) season. Such an amazing shift from a few years ago. Richard Jackson IV was not only ranked in CCS, but is ranked state-wide: #7 for Scoring, #7 for Touchdowns #12 for Rushing. His teammates really gave it their all to deliver an undefeated season including James Lambert “Lambchop” (rated #5 in CCS for rushing yards and #11 for touchdowns) and Kicker Joaquim Bonnet who is #17 for Scoring in CCS (by kicking extra points). A big turnaround in a few short years. This combined with other Gunn D-1 champs (Boys Soccer, Girls Soccer, Girls Water Polo, Girls Volleyball) show that there is more than one “sports” school in Palo Alto. So exciting for the Gunn community. Word!

Gunn decided to honor its sports team the same as if it were any other year, which means the school recognizes the football team as league champions.

Exactly. And PAUSD board, plus Superintendent Don Austin — a former D3 lineman — should lobby CCS to have Gunn declared sectional co-champions. And leaders in Los Gatos, Menlo Park and private Serra should joinder or do likewise. There is no playoffs to refute such a claim. Maybe the stats show that Gunn finished ahead of Los Gatos, M-A and Serra.