We are taking our dog to Sausalito Fair in, like, 10 minutes but not before I quickly post about the Stanford tennis player and her father

in happier times, Ahn celebrates her win at the Open

Based on Yesterday’s Research and Revelation: Or, Kirstie Ahn Should Take a Gap Year
It’s no good when the evening of your greatest victory ever the news is about how your father thinks you should quit and become a corporate clone, or a mother. And it’s not obvious from her Tweets what she intends to do about it; she’s conflicted. I would say: take a gap year, no matter how it turns out today (or yesterday?) at the US Open, 3rd round.

pre-ramble:
Ahn qualified for the 2008 U.S. Open when she was 16. She wanted to turn professional and take the first-round prize money she earned — $18,500 that would have meant forfeiting college eligibility.

“I was like, ‘But if I won the U.S. Open, I could take the money and pay for college!’ He was like: ‘No, I don’t care. You’re not getting into Stanford without being on the tennis team.’ ”

Don Ahn would not budge. [Note: and Don Budge would not “ahn”]

“Just playing tennis without education is nothing,” he said. “You have to be an educated person to live a life in society.”

Kristie ended up at Stanford, becoming captain of the powerhouse women’s team there.

When she graduated, she made a deal with her father to pursue professional tennis. He agreed to provide financial support for three years.

Being a Stanford grad doesn’t necessarily help; I recall meeting Stanford’s Sara Choy when she was at Terman, because she lived on my floor, 3 doors down, and Oak Creek ran her picture in its newsletter (We actually met in the laundry; her bag was bigger than she was). In an interview in a Stanford press lab, she said she played tennis so fervidly because her goal was to get in to Stanford. But she didn’t indicate why that was important to her. What about Stanford? What about the rest of her life and the brave new world beyong Palo Alto, Stanford, Perry Lane, Menlo Park, Oak Creek, the 650, the midPeninsula, the no-mans-land between baseline and net?

Any the Mom didn’t seem much help, besides being of the flaming stripe tiger varietal. I said “Good luck to your daughter? I played tennis for Terman, too” and she scanned me, more like The Terminator than a human, and walked away wordless. Ok, it was St. Francis versus Sacred Heart and, that she blew off Gunn — home of Emily Zhou, Barrie Bulmore, Cammie Mitchell, Stephanie Savides, Stacy Savides, Vedica Jain, Rebecca Dirksen and Ken Arnold, plus ironically, her SHP coach Jeff Arons — maybe she was actually picking up my vibe, my chip.

So what I noticed about Ahn, and I will link to the story and update at below if there is another result good or bad, is that according to her Stanford Sports bio, she went to Professional Childrens School in Manhattan, the oxymoron Oxford. The school, we soon glean, was founded 100 years prior for child actors on Broadway, and only recently started positioning itself as a school — better than home-schooling — for underage pro caliber athletes — although in this case it is a misnomer because Ahn, who was #2 mostly at Stanford — retained her eligibility.

Ahn has actually earned $500K on the pro circuit — which I admit is more than I have earned certainly since 2015 and maybe all time. But the story is that her parents said they would support her for only 3 years, and now, though apparently self-supporting, she has moved back in with the folks.

She could be partner someday, Dad says. Maybe she could be Kirsten Ahn someday.

Other famous Professional Childrens School products include Sarah Michelle Geller aka Buffy the Vampire Slayer; Ricki Lake aka Tracy Turnball who starred with Vinyl in John Water’s original Hairspray; I did not recognize any of the other athletes AND they fail to list Ahn. 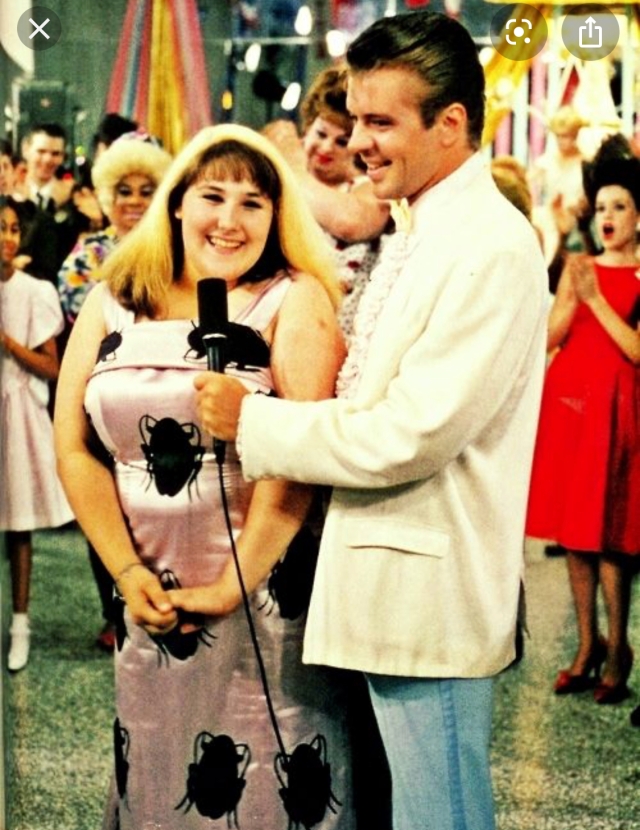 Ricki Lake as Tracy Turnbull in Hairspray during her student days at Professional Childrens School, the alma mater and surrogate mother of tennis flash Kristie Ahn

I remember being shocked, surely shocked, at this photo of Professional Childrens School student Buffy the Vampire Slayer:

I watched 3 min of this with sound office, looking for body language facial cues, and she seems normal enough, but there is something about young athletes, especially training under their parents’ watchful eye, from a young age, that I think thwarts excellence as it precipitates excellence in a narrow field. And I am flashing to the movie about the chess prodigy — Looking for Bobby Fisher – where the mom goes “My child is better at chess at age 10 than you will ever be at anything” which cuts both way. I agree: this is man-splaining.

edit to add, the next day:
Duffy was denied entrance to the Fair, hence we had no ‘bone.
We visited the Bay Model instead — snuck him in, I guess. But the good news, further, if you read Plastic Alto for its coverage of Earthwise Productions, the agent for Big Sam returned by call and we are discussing some of his other clients for The Mitch. We also, at a local diner or cafe met a guy who said he had a jazz label called Clarity. Always good to pick up tidbits about the biz. But for the grace of god.

and1: digressing even futher from either comment on athletics or comment on media to my primary directive which is either music, my music aka Earthwise or my self (Shields, 2010), I met Anna Conrad –tho at the time she had a more Jewish name — Anna Bernstein Conrad or something, tho she is German — becuause I did some show or was setting up a show or just re-visting Jonah Montranga (Far, oneline drawing) and he mentioned that he was on his way to play hotel cafe — maybe I saw him at Hotel Utah — with Anna as a package but they were told that they would split their show with John Mayer, who was doing a secret show, that would be annnounced shortly before his hit via Twitter, back when no one knew what Twitter was. (And for the record, I still am a refuse-nik, for most social media, beyond WordPress)
but Anna, who also reocords or posts under Anna River, has a cover, besides her little cocktease novelty thing — Bradley Cooper, John Stamos, Jason Sudeikis, all with hoes on their dicks — does a cover of Alvvays “Dream Tonite” which sent me to the original which has 1.5M views. I saw the entire set of Alvvays last night at Frost which I enjoyed. I’ll steel a line from the super-brain known as Kato-Rodriguez/ YoshiMiguel: they sound like Six Pence None the Richer meet Something More Indie. I sent the agent, who i Don’t know otherthan he works with Tom Windish — the best ears in the game — after half a song saying I liked but by the end it storted to bore me. Or bore on me.

I left The National after about 10 songs. I live 2 miles from Frost and am in the music biz so I go to every Frost show. So far I would say Lionel Richie was the best (JRAD, the National).

Ahighlight for me is that a lady my generation liked by Yo La Tengo shirt,and shot my photograph –and I remembered to suck in my tummy — and then I tried to trade it to her for her The National T but then we settled on me selling it to her for a bargain price — not to dis YLT, far from it. She was a rabid fan so ithought the shrit belonged to her. I picked it up at The Fillmore a couple years ago – being certainly the only fan to catch the Giants -Mets night game and then zipping over to catch the last 3 songs. Yo La Tengo being named for the Mets in their early pathetic days when Chico Escuela collides with Frank Howard or Frank Thomas (not the Big Hurt guy, a white guy) and then claimed it was because the shortstop called him off in Spanish).

Besides my own onsales, I have: Jenny Lewis, Jay Som, maybe Cake Ben Folds in LA, Mixtaape or something. Willie Nelson if he gets better.
My shows: John Santos, Sun Kil Moon, Molly Tuttle, Scott Amendola Trevor Dunn Philip Greenlief, Tom Harrell. Plus a couple offers and holds. Who knows.
I saw a guy with an APE hat and wondered if he was their protesting the rigged bidding that Greg Perloff described to a reporter n The Metro.

and and: As i write this on a Labor Day late morning, I am screening Boogie Nights lazily in the background but I stopped the film when Snif N the Tears “Drivers Seat” came. It reminded me that in Richardson Hall at Dartmouth College, someone on the floor below would play this song constantly very loud, and it annoyed the rest of us, directly above. Also, my friend A_ said that at Stanford a few years before, all the kids would simultaneously play “My Sharona” at midnight in his dorm. These were turntables.

There was a guy named David Dawley who I quoted in the Dartmouth as saying that his dog Sniff could pick stocks in a bull market as well as President of the College David T. McLaughlin. And did I mention that I met a tennis recruit from Gunn named Emily Zhou but pronounced “Cho” and her parents. She is #75 recruit in the country but did not play for Gunn. I said I was briefly an assistant coach at Gunn for the same guy.

I’m watching a German and an Argentinian on tv right now but will try to catch a bit of Ahn’s match as well: Good luck!

Maybe what ties this together is me, Mark Leland, Nick Sturiale and Andy Zenoff as delinquent juniors drinking suicides and cranking Van Halan and Montrose and using our tennis racquets as air-guitars.
The history of air guitar indeed might include tennis racquet as a preliminary phase:
Proust, 1891: 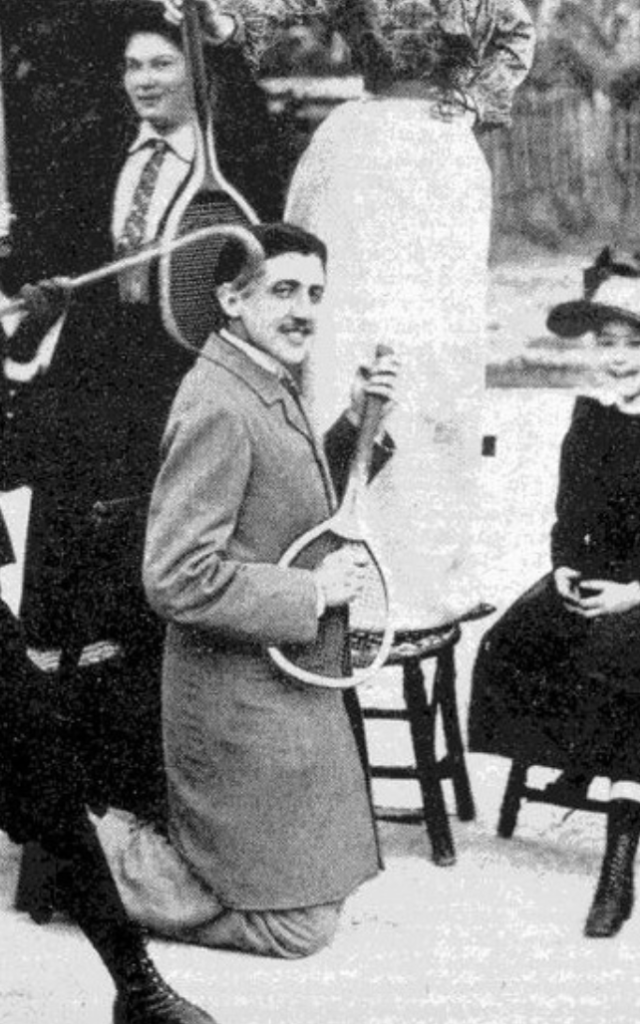