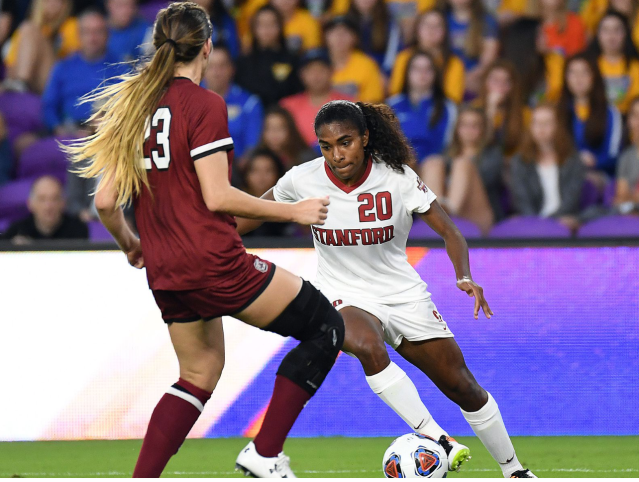 I have not been to a Stanford Women’s soccer game in many years, but I may go this year to check out a special player named Catalina Macario.

An SB sports columnist posted a vine of a great goal against Penn State where Macario scored 1 v. 5. That means there were five players attacking her, but she held the ball, whirled, found space to kick and beat the Keeper – -ok, 1 v. 6.

I found the vine from Kim McCauley of SBNation and also PAW story.

I was noticing the men’s poster in the window of Gerardo’s barber shop on Ramona. The men have won five straight conference titles and three national championships.

My goal is to catch 1 women’s game and 1 men’s game, and then see what happens. I’d like to catch a football game, as well.

One of my favorite Stanford soccer matches was when Santa Clara beat Stanford 2-1 and a kid from Gunn scored the winning goal — a teammate of Andrew Jacobson who also went on the MLS. From Morocco I think, Melachy? The led Gunn to the CCS title.

edit to add: I attended part of the first half and heard one goal but did not see it. Macario scored twice in the second half, in a 5-1 win.