In truth, Bruce Springsteen never played Palo Alto, except a cameo for a Clarence Clemons show 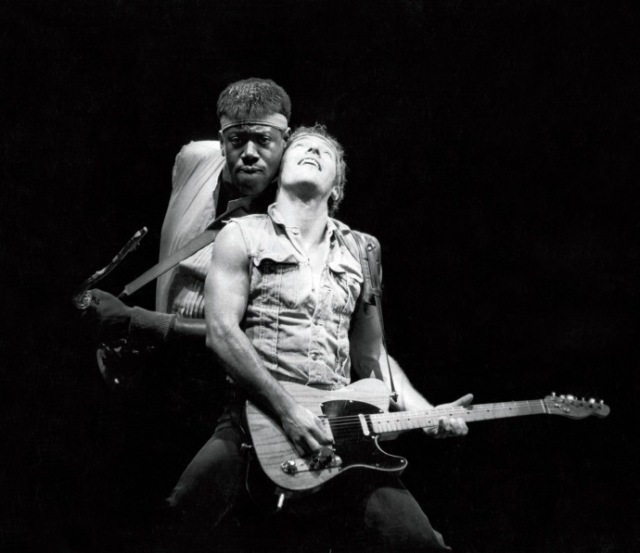 Bruce and Clarence, by Laurie Paladino, circa 1984, but not in Palo Alto, not at the Keystone

If you look, you can find a review by Jeff Santosuosso in the Stanford Daily, from the December 3, 1982 show.
edita:
The Jerry Garcia photo, by Baron Wolman, makes sense, since he played there 81 times.

Jerry by Baron Wolman, a print of which you can see in lobby of 260 California Avenue, Palo Alto

The Ray Charles less so. Better would be something like Art Alexakis of Everclear, who I saw there and epitomizes the Edge “modern rock” vibe of the 1990s. Developer and landlord Mark Conroe tips his hat to the site’s rock days, and installed this hall of fame, but I wish someone had reached out to him about bringing a music venue — something acoustic — rather than a restaurant per se. Will try it and report back. Or maybe Mark will find another site, in town, for music, if there is a strong incentive, like a subsidy or TDR. He says he went to shows at 260 Cali The Keystone Palo Alto when he was at Stanford.

andand: this doesnt go here at all, except that the quirk of the internet falsely connected the two threads: the 2011 movie about Deadheads and neuroscience, “The Music Never Stopped” based on a 1993 essay “The Last Hippy” by Oiver Sacks, was produced I mean directed by Jim Kohlberg, a Palo Alto based (ok, Portola Valley) venture capitalist or financier. That would be another guy to get involved in getting a venue going down here. Somewhere at the time, and in a set of gratuitously oblique Plasty-alt ways, I either plugged or panned the movie. I remember thinking it odd that we waited so many years to tell the story, and that the essay was from a collection that pre-dated the more recent Sacks’ “Musicphilia”. The times reviewer noted an anachronism of vegatiarianism or something. The film’s title, which again, to repeat myself, differs from the title of the essay, is also that of a 1975 song on “blues for allah”.

andandand: this reminds me of when Terry and I were driving this spring to Seattle and back, we stopped in this little town in NorCal, I think in the area that Tim Draper wants to spin off as Jefferson, where the guy at the minimart sold me on buying “wet Jerky” and also pointed out the old inn across the way, shuttered and said something about Jack London. When you look it up, or read the plaque, or the AAA book, it says something about “people say that Jack London stayed there”. Not that he did, but people say it.
http://www.amazon.com/Musicophilia-Tales-Revised-Expanded-Edition/dp/1400033535

or the fake Jeremy Lin monument at Mitchell Park library court (where close to nobody plays and just as well: nobody over the age of 15 should play there, lest they brake an ankle. Maybe the counter-move is to claim this is where Jeremy broke his ankle)