We got this say Stanford, or we got next?

I met this woman, the head of Stanford’s Student Union and she told me she organized the event. I have a couple other shots. I did speak to the group for about 2 minutes, and missed most of the previous speakers, I am guessing a dozen or more while I caught two or three.

The story is ongoing. I bought the Times and mean to process it. The thing weeks later about the public art agit-prop gone awry is an interesting side note but just that – and it reminded me of “Gunn Graffiti Hate Crime”. 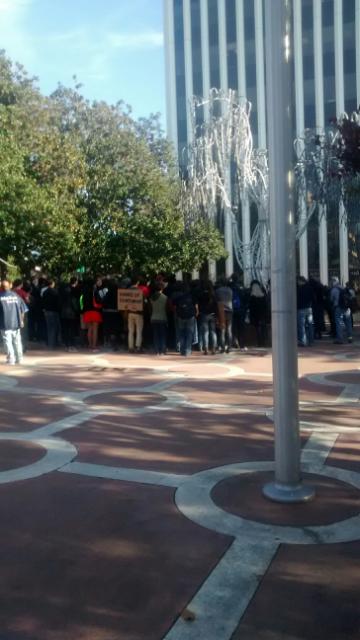 I wish I caught more of the Stanford students’ speeches, and want to hear their current thinking on these affairs

edit to add: I heard from Shelby Sinclair seven years later; she is a PhD candidate at Princeton. Maybe she will be President some day. Of a college, university or “the leader of the free world”. Coincidentally, I spoke tonite at the Palo Alto Public Art Commission meeting and lauded our BLACK LIVES MATTER mural. I literally held up a fist and said “Black lives matter”.