I noticed you once or twice on University Ave in Palo Alto; actually, I saw you once only, driving past, and circled again to catch another glimpse. If I had ever seen you while on foot I would have stopped and watched and then chatted you up. I have met probably 50 street musicians this way.

I have a study of buskers, called “ICOBOPA”. I’ve also spoken at public hearings about the importance of street music.

Good luck to you.

This person, Gabi Holzwarth of Redwood City,  was profiled by Nellie Bowles for ReCode, Nellie Bowles who also wrote about Pace Gallery Popup in Menlo Park (which I am writing about).

I still think the recent Palo Alto ordinance prohibiting amplifiers at Lytton Plaza is unconstitutional and am busking so to speak for a plaintiff to challenge the policy. I actually sent a little note about this to Bob Lefsetz, in response to something he wrote about the One Percent.

I was also recently back and forth with Jerry Hanan about doing some street music here. 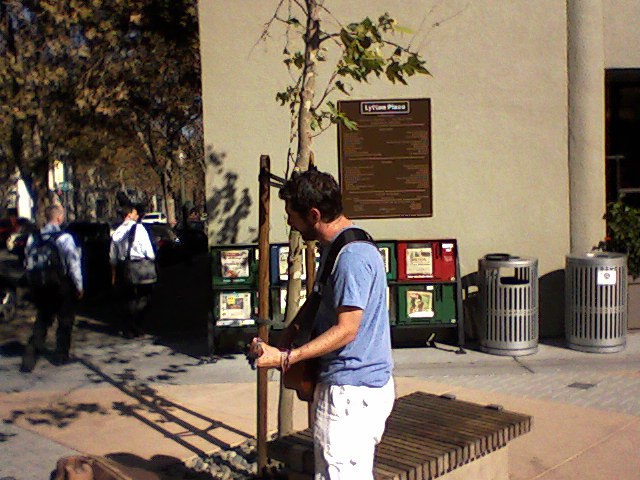 This is actually me, Mark Weiss, performing as Beat Hotel Rm 32, with Tommy Jordan (who took this), Dave Hydie, that guy with the custom painted congas, and Buttons, Dec. 2011

2 Responses to Gabi the violinist