Happy Dao, and how!

“Happy birthday, Dao. From Mark” that was a text I sent to my former client, the singer-songwriter, novelist and mom Dao Strom, who lives in Portland now, at about 9:45 last night, as Terry and I were both falling asleep during “The Voice” and “Smash”.

Dao texted me back about an hour later:
Thanks mark, hope u r well : )

I was Dao Strom’s exclusive personal manager for her music catalog and endeavors for an 18-month initial term in 2008 and 2009 and we continue a type of correspondence and dialogue.

I certainly wish her well and continue to talk her up where appropriate. That, plus the random text or voice mail I leave; I wondered what she made of Jeannette Walls, for instance.

I just re-read, thanks to the leading search-engine archive, a passage from Dao Strom’s second novel, “The Gentle Order…” about the John Ford film “The Searchers” and am comparing that brief perhaps esoteric topic to the fact that Jonathan Lethem also made a big deal about his take on that film. I saw that film recently at Stanford Theatre, but it did not leave too profound an impact on me, beyond whatever you can make of me or my psyche or my skillset here.

I am kind of jonesing — although this is definitely a departure from writing a tribute to Dao, for her birthday — for Santa Fe. I am kinda tempted to fly down there in two weeks for a Wallace Stegner tribute they are doing. Dao Strom and I were founding partners of our own Stegner tribute that involves songwriters writing songs based on the collected shorts of WS.

I also, somewhat randomly, have a couple couple Native American jpegs in my dumb-phone that I might as well upload here as anywheres.

Dao has a line in one of her books about a character being addressed as “Sue” and the character wondering if the speaker thought she was Native American (“Sioux”).

This is a photo I took at the toy store at Town and Country of some temporary tattoos or stickers that depict various tribes, including Zuni and Acoma from the Pueblo area, their garb and in some cases the pottery; I may already have this somewhere in my files but for $3 or so I don’t mind the duplication maybe I will go back there later today to grab this, or I will grab two and quixotically send one to Dao, whatever she would make of it.

This is a detail of a painting I bought at an estate sale in Menlo Park. I am meaning to send the photo to Santa Fe based painter Tony Abeyta who is said to be something of a scholar on his forebearers. Again, a digression from Dao, excepting the fact that it depicts a mother figure and Dao is a mom. 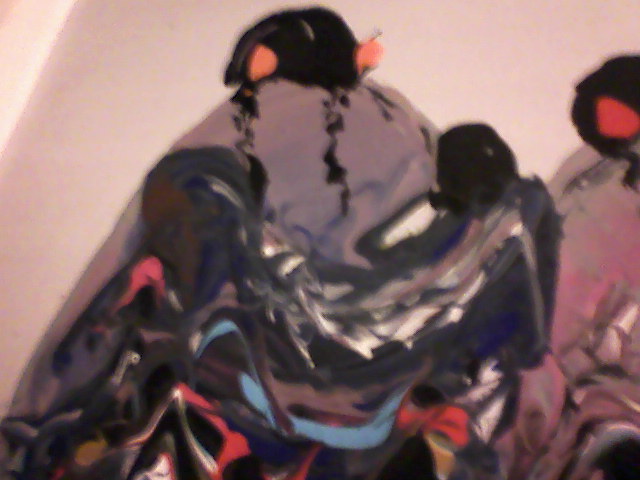 Third, I have a snapshot of a knit cap for sale in a boutique in SF, from Shepherd Fairey’s Obey line, not of agit-prop appropriation but a rip-off of Navajo weaving design. I did not buy this cap but do have something similar that Guillermo Gomez Abascal brought me recently that he said is authentic and typical, from Mexico. I do have an OBEY baseball cap I bought on my recent (January) birthday that I rarely have worn and generally try to rock it in the self-mocking way: I think OBEY is very 1998 or so. Likewise, and if you excuse the digression, I wear a John Goodman from “The Big Lebowski” I DON’T ROLL ON THE SHABBOS” shirt which I only wear on Fridays or Saturdays but have vowed to de-access if I ever see someone wearing it while I am wearing mine. (splitting the difference, if not picking up the spare, of Native American identity, the Vietnamese diaspora and being a Jew).

One more: I have been carrying this around in my phone for nine months now; it’s a Warhol “Sitting Bull” from the collection of Dartmouth College, I saw and got at my reunion; I meant to spend these last few moments writing about the “Wheelock Succession” but got mentally abducted — like the young girl in the Ford film, if you will” by Dao and the “search-Injuns” if you ex-squeeze the awful pun.

Dao, go with your “silly” and “unconscious” urges and just let it flow, dear. Or, as Dar Williams would say, “oh-oh-oh, oh, you’re aging well”.

2 Responses to Happy Dao, and how!