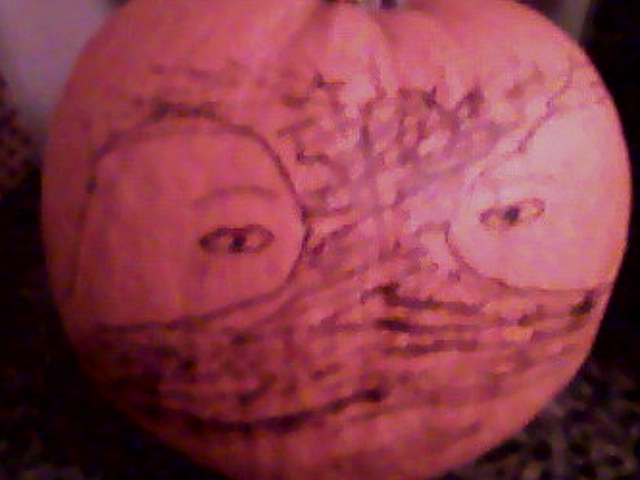 It took me until November 19 to get to it, and it is rather under-articulated, but I finally found literally five minutes to actualize my jack-o-lantern idea, which came the other day when I caught my recommended weekly requirement of sports bar time, watching UEFA soccer, and I noticed former German National Team captain (and Chelsea) midfielder Michael Ballack wearing a pretty scary looking facemask. Not to be too unsympathetic — but hey its quite possible that it was his great-great-great-great greatparents — his Grand Umpapa playing demo version of “Iko” with my great — you get the picture — I come from, in at least one direction, a family that were the equivalent of sharecroppers in Eastern Germany, Gros-Bieberau I think it was called, my cousin was a VP for European Business at National Semi and did some research back to 1750 or so. We could live on someone else’s land but not actually own land. We had to “apply” to be a member of the community and in fact most of the family lived outside of that designation. We were “kept” or “protected” but not actual Germans.

If I get a minute i will suss the etymology of Jackolantern — I also have half a mind to reread a Washington Irving story that fits this general topic. “Legend of Sleepy Hollow”. Also kind of sorta calls to mind that I talked to David Hess recently in Baltimore and am psyched to see or at least hear tidings about some huge outdoors piece he is doing there, and it gave me chance to recall and retell the story of visiting Edgar Allan Poe’s grave and placing an offering in the form of a Teddy Ruxpin pin. (LIke when I left a purple Longhair coin or maybe Satchmo at a voodoo hall in NOLA).

edit to add: I am not liking my quick take on “Jack-olantern” but will try to check it with my trusty Webster’s 9th. “The Legend of Sleepy Hollow” by Washington Irving susses up, featuring a chase between Ichabod Crane and a “hessian trooper” known as The Headless Horseman, but I cannot quickly find the animated version I saw as a child that would have featured the villain launching like a Randy Big Unit fastball a flaming and presumably lethal jacko at poor Ich. We had a guy in our Dartmouth class who was called Ick. I think his real name was Jeff. (I didn’t call him Ich or Ich). Dartmouth has or had a humor magazine called the Jackolantern or the Jacko coincidentally although I never worked for it and hardly read it, although Mindy Kaling and Dr. Seuss did (not overlapping). I also need something to sort will-o-wisp from whip-poor-will, which I think Irving glosses. Glosses, susses, the SS — oy vey. There also seems, according to wiki, to be some kind of a Nathaniel Hawthorne cite re Halloween or Jacko. Anyhoo, I will perhaps get permission from my neihbor to put Michael Ballack in his lawn until he rots or is stolen. I also have a cool yellow and gold and green gourd I bought for aesthetic rather than culinary purposes from Palo Alto Saturday Farmers Market, which I guess we will eat soon enough. I also grabbed a cool leaf that I plan to reproduce with help from Accent Art inventory and labor and give to my dear old mum. I’ve done about 100 pretty crap art efforts over the past year or so, probably ringing up $500 in charges from Accent Arts, the official purveyor of Earthwise/MBW11/Plastic Alto art staples, that in addition to probably procuring 50 pieces or things, more if you count flyers I steal prematurely from polls and boards and kiosks. Way off topic. Back to football, US college variety. Why do we call it “College Football” and not “University Level Football” when the majority by far of the teams are from major Universities, outside of Ivy League. How is NCAA still “collegiate”.

Michael Ballack, 35, is wearing a carbon-reinforced mask to protect a broken nose suffered a few weeks ago in Bundesliga play for Bayen Leverkusen.

I am also drifting into someone’s posts about an Italian (Bologna) artist ericilcane I think doing versions of teddy ruxpin as medical drawings — also bleeds into street art. Save for another day.

edit to add, November 24: It took me a while to check my Webster’s Ninth, to add this minutiae:

1) jack-o’-lantern, note the apostrophe, entered the language in 1673, a lantern made of a pumpkin cut to look like a human face — but when did painted or in my case badly drawn features become en vogue? also, foolish fire, translated. —  ignis fatuus is first definition. Ignis fatuus, see also St. Elmo’s Fire, entered language in 1573, although that’s Latin. a cognate. A delusional goal or hope; a fire over a marsh; St. Elmo’s Fire entered language in 1804. Will of wisp entered language in 1608; see also whip-poor-will, whipperwill, 1709, a nocturnal goatsucker, nightjar, 1630. Caprimulgus. I still have to find the animated version of “Sleepy Hollow” that includes the jack-o’-lantern tossed as projectile…moving on to next holiday. Let’s talk turkey.