The V. Monocles: or, how do our burgers rank? 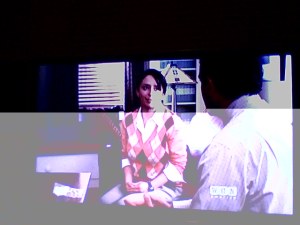 I noticed that the Daily News (formerly the Palo Alto Daily News; also published in San Jose Mercury) had a society column that included coverage of an Eve Ensler appearance at the stodgy Castilleja School for Girls here. What I found even more remarkable, however, is that the columnist could not bring herself to mention Ensler’s most famous work, “The Vagina Monologues.”

Pondering this had me renewing my correspondence with fellow Dartmouth grad the comic and writer Jen Dziura. Jen apropos of this forwarded a link to a bit of hers in which she tried to win a contest for purported paranormal powers by revealing that she has an uncanny influence over men. (She claimed that her vagina has the power to make men buy her hamburgers; this was reported in McSweeney’s). I have been wanting to help Jen Dziura bring her act here to Bay Area — if only to learn, how do our burgers rank? Her work also reminds of the Stanford Prison Experiment (Zimbardo). Maybe we can produce a demonstration of her powers at Stanford.

Jen also works on a comic version of a spelling bee which reminds me of my previous post about math whiz/spelling bee champion Evan O’Dorney; Steve Cohen and I enjoyed a chuckle watching young Evan unbraid a CNN reporter, as documented on Youtube.

I also (because segues are my weakness, perhaps more so than are hamburgers) wanted to tie in the Rachel Dratch guesting on “Monk” that I tivoed the other night (above). Rachel and I overlapped for two years at Dartmouth, although I don’t recall meeting her. Hanging out with one of her friends, however, brought me one night to a recital by the East Bay modern dancer, teacher and choreographer Mary Armentrout. (Mary, in this column, is guesting for Laurel Nakadate, who I will gloss elsewheres).

edit to add, almost a year later — Mardi Gras, 2-21-12, because I am working up my Harbaugina piece:

30 Responses to The V. Monocles: or, how do our burgers rank?